Police in Ahmednagar district of Maharashtra have arrested a 54-year-old chef for allegedly killing a mentally-challenged man and passing it off as his own death. 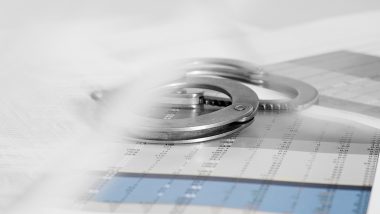 Ahmednagar, October 27: Police in Ahmednagar district of Maharashtra have arrested a 54-year-old chef for allegedly killing a mentally-challenged man and passing it off as his own death. The accused was identified as Prabhakar Waghchaure, a wealthy chef based in Washington DC. According to the police, Waghchaure committed the murder using a snake to fake his own death so that he could claim 5 million dollars in insurance from a US-based private insurer. Maharashtra: 20-Year-Old Youth Impersonates Indian Army Officer To Marry Girlfriend In Ahmednagar, Arrested At Bhingar Cantonment.

According to a report by Times of India, Waghchaure and his four associates are accused of killing mentally-challenged Navnath Anap using a posinous snake. They allegedly committed the crime at a desolate place near Rajur village in Ahmednagar district on April 22 this year. Following investigation, cops managed to nab all five accused. Subsequently, it came to light that Waghchaure wanted to claim USD 5 million from an insurance company by faking his death. Hence, he killed Anap and tried to pass it off as his death. Maharashtra Shocker: Eunuchs Allegedly Murder Man For Refusing To Give Money in Ahmednagar District; Eight Arrested.

Police booked the chef and other four accused under sections 302 (murder), 201 (causing disappearance of evidence of offence, or giving false information to screen offender) and 34 (common intention) of the Indian Penal Code. On October 25, all accused were produced before a court which sent them into police custody till October 29. According to Ahmednagar Superintendent of Police Manoj Patil, Waghchaure's greed for more money led him to commit the crime.

"Our team will be questioning him to find out if he has committed any other fraud," the SP was quoted as saying. Police also revealed that four years ago Waghchaure had submitted a fake death certificate of his wife in a bid to claim insurance amount of a policy in her name.

(The above story first appeared on LatestLY on Oct 27, 2021 11:42 AM IST. For more news and updates on politics, world, sports, entertainment and lifestyle, log on to our website latestly.com).