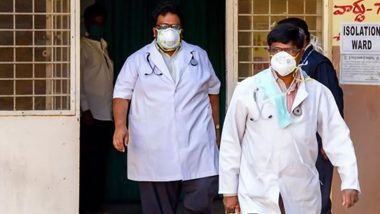 Bhopal, April 9: The Resident Doctors’ Association at AIIMS Bhopal wrote a letter to the Director of the institute complaining about the "abusive behaviour and physical assault by policemen on resident on-duty doctors" amid the coronavirus lockdown. In the letter, it is mentioned that how policemen attacked two doctors who were returning from duty. The policemen went to the extent of hitting them with a bamboo stick and hurled abuses at them.

Even after the doctors, showed their ID Cards and told them that they were returning from their duty, the policemen continued hurting and abusing them. The two doctors then left the place, leaving their stuff and called two senior doctors asking for help. Ever since the outbreak of coronavirus, there have been several reports on how doctors are being illtreated as the spread around the deadly disease manifolds. From being asked to vacate their houses by landlords to physical harassment, there have been several such incidents that have come to the front lately. Two Female Doctors of Safdarjung Hospital in Delhi, Who Stepped Out to Buy Fruits, Assaulted by Neighbours For 'Spreading Coronavirus'.

The Resident Doctors’ Association at AIIMS Bhopal has written a letter to the Director of the institute regarding "abusive behaviour and physical assault by policemen on resident on-duty doctors".#MadhyaPradesh pic.twitter.com/sTtKLjIWHf

As the number of coronavirus cases increase, hospital authorities in several parts of the country are scrambling to deal with the outbreak. Earlier in the day, a 42-year-old man in Delhi was arrested after he allegedly accused two female resident doctors at Safdarjung Hospital of spreading coronavirus and assaulted them. The two doctors, posted in the Emergency department of the hospital, were not dealing with COVID-19 patients. Surprisingly these incidents continue to be reported just a few days after PM Modi urged people to applaud the efforts of the doctors and the other frontline warriors in the coronavirus battle from their balconies.

(The above story first appeared on LatestLY on Apr 09, 2020 12:48 PM IST. For more news and updates on politics, world, sports, entertainment and lifestyle, log on to our website latestly.com).