This year, the 45-day long annual yatra began on July 1 and concluded on August 15, which coincided with the Shravan Purnima festival. The record number of yatris visiting the cave shrine was higher this year despite terror threats over the Amarnath Yatra and inclement weather conditions. 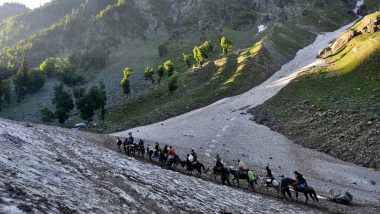 Srinagar, December 26: As many as 3.42 lakh pilgrims performed the  Amarnath Yatra in 2019, a rise of nearly 20%, as compared to 2018. This year, the 45-day long annual yatra began on July 1 and concluded on August 15, which coincided with the Shravan Purnima festival. According to government data, a record of 3,42,883 yatris visited the cave shrine this year despite terror threats over the Amarnath Yatra and inclement weather conditions.

The annual pilgrimage attracts scores of pilgrims from around the world and  generally starts from Pahalgam or Baltal. Pilgrims approach the cave shrine either through the longer 45-kilometre Pahalgam route or the shorter 14-kilometre Baltal route. The yatris who use the Baltal route return to the base camp the same day after performing the Yatra.

According to history, the ice structure waxes and wanes with the phases of the Moon.The cave shrine, situated at 3,888 metres above sea-level, has an ice stalagmite structure that symbolises the mythical powers of Lord Shiva, according to the devotees. Pilgrims also have an option of helicopter services from both the Baltal and Pahalgam routes.

In 2019, 450 additional companies of CAPFs were deployed for the security of this year's Yatra, reports said. Meanwhile, emergency services and medical facilities were put in place all along the two routes to the cave. The area where the cave shrine is located is conflicted as there have been cases of terror attacks in the past. In 2017, as many as seven pilgrims were killed and 18 were injured after Lashkar-e-Taiba (LeT) terrorists opened fire on their bus in Khanabal in Anantnag district.

(The above story first appeared on LatestLY on Dec 26, 2019 01:40 PM IST. For more news and updates on politics, world, sports, entertainment and lifestyle, log on to our website latestly.com).