A woman has been allegedly raped by four persons including three minor boys on the outskirts of Assam's Morigaon town, the police said on Saturday. 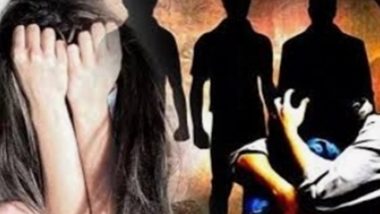 Guwahati, Aug 13: A woman has been allegedly raped by four persons including three minor boys on the outskirts of Assam's Morigaon town, the police said on Saturday.

The incident took place around 10 days ago. Morigaon district Superintendent of Police (SP) Aparna Natarajan told IANS that of the four accused, at least three are juvenile.

The victim has alleged that the boys had filmed the entire act on a mobile phone. Delhi Shocker: Minor Girl Kidnapped, Raped in the National Capital; Accused Arrested.

One accused has been apprehended by the police on Saturday and he is being questioned.

Another accused is absconding and the police are looking for them.

Meanwhile, the police are also conducting operations to identify the other two accused.

According to police sources, the victim's husband lives in Arunachal Pradesh, and there was uneasiness in the family once the woman informed them about the incident. The case was reported late due to the family dispute,

It was also reported that the incident took place at a cremation ground. Natarajan, however, said this could not be confirmed as of now.

The police officer also said that they have been investigating whether the video that was shot by the accused was circulated or not.

(The above story first appeared on LatestLY on Aug 13, 2022 11:14 PM IST. For more news and updates on politics, world, sports, entertainment and lifestyle, log on to our website latestly.com).