Karnataka Health Commissioner D. Randeep has clarified that there is no reason to panic on the detection of new Covid variant AY 4.2 in the state. The technical advisory committee has discussed in detail on the spread of AY 4.2 variant. 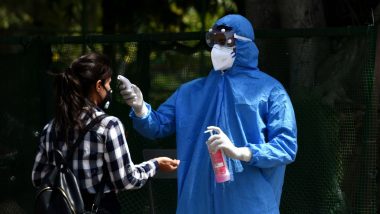 Bengaluru, October 27: Karnataka Health Commissioner D. Randeep has clarified that there is no reason to panic on the detection of new Covid variant AY 4.2 in the state. The technical advisory committee has discussed in detail on the spread of AY 4.2 variant. The number of infected persons are less. The spread of new virus is more in UK, Russia and Israel, he said.

But, the rate of spread in Karnataka and Bengaluru is less. During the second wave Delta variant was stronger. Now, there is no fear of spread of AY 4.1 virus, he explained. The investigation of new variant is underway. Further investigation is required. There is no clarity as such on ground that the new variant could spread faster than Delta variant. This variant has not found in any containment zone. There is no clarity on the new variant causing third wave, he maintained. AY 4.2 COVID-19 Variant in India: Karnataka Reports 7 Cases of New Coronavirus Variant, Triggers Fear of Possible ‘Third Wave’.

The department has decided to initiate measures of isolation, testing, containment in case of spike. The existing rules and guidelines will be followed as there are lesser cases of Covid and rate of infection is also low, he explained.

In Bengaluru alone, three AY 4.2 cases are detected. The infected are already discharged from the hospitals after treatment. The chain link is not found when primary and secondary contacts were tested, he said.

The intensity of Corona infection is less in the state and there is no need for getting apprehensive. The expert committee has also opined that there should not be any cause of worry regarding AY 4.2 variant, he said.

But, task force had warned that, if a new variant emerged out of Delta variant, then there is a possibility of third wave. "We are keenly watchful of the situation," he stated. Meanwhile, Health Minister K. Sudhakar stated that, they are suspecting detection of two cases of AY 4.2 variant and samples have been sent to genomic sequencing.

A discussion will be held with ICMR and experts will be consulted in case of detection of new variant. The matter has already been discussed with the Chairman of Technical Advisory Committee, he said.

After discussing with senior officers and technical committee, the matter will be discussed with the Chief Minister and preventive measures will be taken up. A decision will also be taken on monitoring of arrivals from outside the state, he said.

In Russia, those who have taken two doses of vaccine are not harmed. The infection is found among those who have not taken vaccine. Including BBMP, across state preventive measures have to be taken, he stated.

"The third wave which is found in foreign countries is going to arrive here also. With preventive measures we can stop it effectively. The government is ready to face the situation in case of third wave. People should cooperate and do not show negligence, which will lead to disasters. Now days, people are showing casual attitude as the Covid rate is low. This is not a good development. Those who got first dose of vaccine, should get the other one also," he appealed.

(The above story first appeared on LatestLY on Oct 27, 2021 09:17 AM IST. For more news and updates on politics, world, sports, entertainment and lifestyle, log on to our website latestly.com).