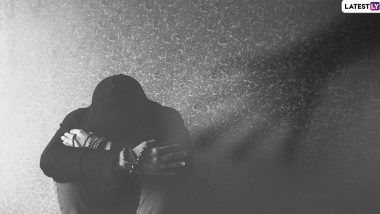 Bengaluru, June 29: A 40-year-old man has been arrested in Bengaluru for allegedly raping his 19-year-old daughter after giving her sleeping pills. The shocking incident took place in Haralur on June 23. Following the sexual assault, the teenager attempted suicide. According to a report by Times of India, on June 23, the girl sought medicine for cough and cold from her father. Bengaluru Techie Sexually Exploits Divorcee He Met on Dating App, Dupes Her of Rs 38 Lakh.

The accused gave her sleeping pills. On the morning of June 24, she found her father sleeping next to her and that she had been assaulted. She immediately informed her stepmother who refused to help her. The helpless teenager decided to end her life and attempted suicide by consuming chemicals used for cleaning toilet. She then rushed to Bellandur police station to inform them as to why she’s taking the extreme step. Bengaluru Shocker: Woman Techie in Debt Murders Mother & Stabs Brother.

At the police station, the girl collapsed after which cops took her to St John’s hospital. Following her complaint, police arrested the accused father. He is being remanded in judicial custody. "We’re waiting for the girl to recover. We’re also probing the role of the stepmother in the incident," cops were quoted as saying.

(The above story first appeared on LatestLY on Jun 29, 2020 11:01 AM IST. For more news and updates on politics, world, sports, entertainment and lifestyle, log on to our website latestly.com).