Lawyer of a Bhopal gas leak victim has moved to the Jabalpur High Court challenging the conversion of the Bhopal Memorial Hospital and Research Centre into a hospital exclusively for coronavirus-infected patients. 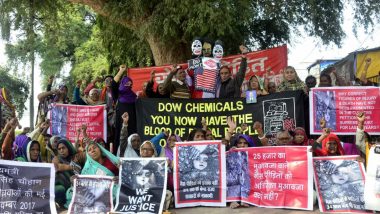 Bhopal, April 9: Lawyer of a Bhopal gas leak victim has moved to the Jabalpur High Court challenging the conversion of the Bhopal Memorial Hospital and Research Centre (BMHRC) into a hospital exclusively for treatment of coronavirus-infected patients. Notably, the victim Munni Bi died on April 8 before her petition could be taken up by the Jabalpur High Court. She had moved the Supreme Court after she along with several other victims of the Bhopal gas leak incident were evicted prematurely because the Madhya Pradesh government wanted to convert the BMHRC into a hospital exclusively for COVID-19 patients. Madhya Pradesh Doctor, Who Tested Positive For COVID-19, Dies in Indore.

The Madhya Pradesh government had issued an order on March 22, stating that the BMHRC will be turned into an isolation and treatment centre solely for COVID-19 patients. Established in 1998 on the directives of the Supreme Court, the BMHRC is a 350-bed multi-speciality hospital meant for the treatment of the Bhopal gas leak survivors. Following the state government's orders, the hospital administration not only shut the OPD department, but also forcefully discharged 86 patients who were undergoing treatment between 23-24 March. Coronavirus Cases Rise to 5865 in India, Death Toll Climbs to 169 With 20 More Deaths in Past 24 Hours.

According to a report by The Quint, families of patients who were on ventilators like Munni Bi were told to take their ill relatives to other hospitals. She had suffered from a heart attack and has been in the Intensive Care Unit (ICU) for the last 24 days. After she was discharged from the hospital without complete treatment, she approached the Supreme Court challenging the conversion of the BMHRC into an isolation and treatment centre solely for COVID-19 patients.

During the hearing on April 7, appearing for Munni Bi, advocate Karuna Nundy informed the Supreme Court that the petitioner was a 68-year-old gas victim who is on a ventilator and is in no position to leave BMHRC to go to another hospital. "She faces a threat of being denied this treatment in view of certain directives of the state to provide support and treatment to patients of COVID 19…Actions which are not only denying treatment to patients like the Petitioner no.1 but is also exposing them to further dangers of the novel coronavirus as their condition is already extremely vulnerable," she had said.

In a matter concerning the Bhopal victims hospital - the BMHRC- being converted exclusively to a COVID 19 centre, the Supreme Court has asked us to approach the Jabalpur High Court. We are taking steps to do so immediately. cc @RachnaDhingra

The apex court directed the petitioner to move the Jabalpur High Court. The next day, Munni Bi died. Moreover, three more victims of the Bhopal gas leak tragedy lost their lives after the Madhya Pradesh government's order. The deceased included a 55-year-old Kalu Ram who was discharged from the Pulmonary Department of the BMHRC on 24 March and transferred to Hamidia Hospital, where he succumbed to his condition on 28 March.

One of the patients who were evicted from the BMHRC died on 2 April, according to The Times of India. She was receiving treatment for a gastroenterology condition. The third death happened after the hospital turned away 55-year-old Naresh Khatik, who would often seek treatment for lung problems. He had later contracted coronavirus and died, making him Bhopal’s first COVID-19 death, The Quint reported.

While three patients have died so far, Munni Bi's petition ensured that two others remain in the ICU on ventilators, while one remains in the cardiac care unit at the BMHRC.

(The above story first appeared on LatestLY on Apr 09, 2020 11:05 PM IST. For more news and updates on politics, world, sports, entertainment and lifestyle, log on to our website latestly.com).