An abandoned vehicle with explosives was found parked near Reliance Industries Chairman Mukesh Ambani's residence 'Antilia" in Mumbai. The bomb scare was just metres away from Ambani's house. The Scorpio had reportedly contained 20 gelatin sticks. 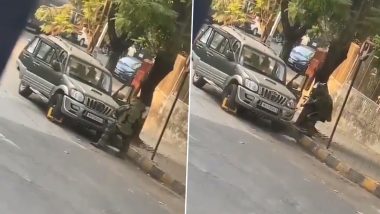 Twenty gelatin explosives sticks were found in a Scorpio car in the vicinity of industrialist Mukesh Ambani’s residence in Mumbai. The Mumbai Crime Branch police is investigating the matter and the findings will be out soon.

Mumbai Police bomb squad team rushed to the spot after getting the information. As per a report published in The Times of India, the vehicle had the number plate of Ambani's security detail. Ambani's security personnel alerted the police. An investigation has been launched into the incident by the Maharashtra government.

(The above story first appeared on LatestLY on Feb 25, 2021 09:10 PM IST. For more news and updates on politics, world, sports, entertainment and lifestyle, log on to our website latestly.com).