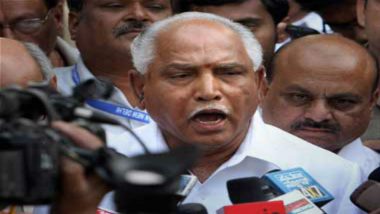 New Delhi, November 4: The Supreme Court on Monday agreed to hear a matter related to an audio clip in which Karnataka Chief Minister B.S. Yediyurappa is purportedly heard backing rebel MLAs of the state's former Congress and JD(S) alliance government. It was the resignation of these rebel MLAs that led to the fall of the H.D. Kumaraswamy government in the state a few months ago. Amit Shah Supervised ‘Operation Kamala’, Says Karnataka CM BS Yediyurappa in Leaked Audio Clip.

Appearing for the Congress, senior advocate Kapil Sibal mentioned the matter before Justice N.V. Ramana, who said it will likely be heard on Tuesday. The Congress has alleged that in the audio, Yediyurappa confessed to carrying out what they call 'Operation Kamala' to bring down the H.D.Kumaraswamy-led coalition government.

Sibal pleaded that the audio clip should be taken on record with the ongoing petitions filed by 17 Karnataka MLAs challenging their disqualification from the Assembly. The top court had reserved order on the petition of these MLAs. Sibal cited it as evidence to support his argument that the 17 MLAs had indeed defected from their respective parties to the BJP.

In July, then Speaker K.R. Ramesh Kumar disqualified them, rejecting resignations tendered by them. The MLAs had remained absent from the House on July 23 when the chief minister Kumaraswamy put the confidence motion to vote.

(The above story first appeared on LatestLY on Nov 04, 2019 01:17 PM IST. For more news and updates on politics, world, sports, entertainment and lifestyle, log on to our website latestly.com).