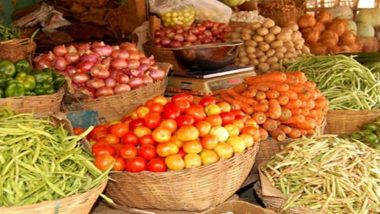 New Delhi, August 13: Retail inflation rose to 6.93 per cent in July, mainly on account of higher prices of food items, government data showed on Thursday.The food inflation, according to the Consumer Price Index (CPI) data, increased to 9.62 per cent in July. WPI Inflation in India Stands at -1.81% For June 2020.

The retail inflation in June was 6.23 per cent, while the food inflation stood at 8.72 per cent.

It is for the second consecutive month that the retail inflation has been above the RBI's comfort level. The government has mandated the central bank to restrict the inflation at 4 percent (+, - 2 percent).

The central bank mainly factors in retail inflation while arriving at its bi-monthly monetary policy.