As the cyclone Fani is expected to make landfall in Odisha on May 3, the Indian Navy has kept its ships on standby for supplying relief material in case of emergency. 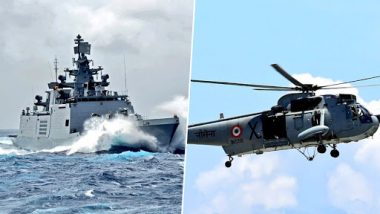 Bhubaneswar, May 1: As the cyclone Fani is expected to make landfall in Odisha on May 3, the Indian Navy has kept its ships on standby for supplying relief material in case of emergency. According to the Southern Army Command, ships at Visakhapatnam are standing-by with relief material for immediate deployment to most affected areas to undertake Humanitarian Aid Distress Relief operations. Diving and medical teams are kept ready augmenting rescue and relief efforts in Andhra Pradesh and Odisha. Cyclone Fani: Odisha Declares Holidays in Schools, Colleges From May 2; Tourists Asked to Vacate Puri by Thursday Evening.

Naval aircraft are also kept ready at Naval Air Stations, INS Dega and INS Rajali to undertake an aerial survey of the most affected areas, casualty evacuation and airdrop of relief material, as required by the State Administration. Meanwhile, The state government has intensified its precautionary measures to deal with any situation. The government has assigned 11 IAS officers to supervise the relief, rehabilitation and restoration work in the districts that are likely to be affected by the cyclone. Cyclone Fani 'Extremely Severe' Now, Landfall in Odisha on May 3: Navy.

#CycloneFani As the winds and seas pick up & the cyclone approaches the East coast of India, #INSSahyadri puts out to sea quietly to brave the storm & provide succour & assistance to those in need, leaving behind their own. Nation First - Always and Everytime @nsitharaman pic.twitter.com/h0paCany3f

Collectors in the all coastal and adjoining districts of Gajapati, Nayagarh, Khordha, Cuttack, Jajpur, Dhenkanal, Keonjhar and Mayurbhanj have been advised to identify all vulnerable people living in kutcha houses or living near the coast or in low lying areas, said Special Relief Commissioner (SRC) Bishnupada Sethi. 879 Multi-purpose cyclone/ flood shelters are kept in readiness for sheltering people to be evacuated. All 28 teams of NDRF, 20 ODRAF units and other Fire Services units are being dispatched to areas on a priority basis. While the government has directed to close all educational institutions from Thursday till further order, it has cancelled leaves of various departments.

Meanwhile, the Naveen Patnaik government has ordered the closure of all schools and colleges in the state from tomorrow till further orders. The tourists in Puri have also been asked to vacate the town by the evening of Thursday. On the Chief Minister's request, the Election Commission has also lifted the Model Code of Conduct (MCC), to ensure speedy rescue and relief operations. The decision was taken by the EC shortly after the Indian Navy categorised Fani as an "extremely severe" cyclone.

According to the Indian Meteorological Department (IMD), the cyclonic storm 'FANI' in the Bay of Bengal lay centred at 0530 hrs IST on May 1, about 680 km south-southwest of Puri and 430 km south-southeast of Vishakhapatnam. It is very likely to intensify further and cross Odisha coast between Gopalpur and Chandbali, to the south of Puri around May 3 afternoon with maximum sustained wind speed 175-185 kmph gusting to 205 kmph.

(The above story first appeared on LatestLY on May 01, 2019 05:53 PM IST. For more news and updates on politics, world, sports, entertainment and lifestyle, log on to our website latestly.com).