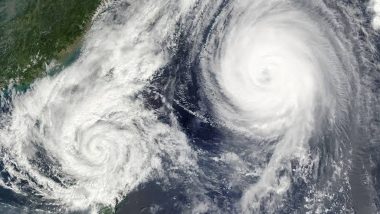 The IMD had issued an alert that the state would receive heavy rainfall on December 9 and 10t due to this weather phenomenon.

The deep depression over the Southeast Bay of Bengal was likely to intensify gradually into a cyclonic storm and reach the Southwest Bay of Bengal off the North Tamil Nadu, Puducherry, and Andhra Pradesh coasts.

The IMD senior officials said that heavy rain will occur from December 8 to 10 in Tamil Nadu, Puducherry and Karaikkal areas due to this depression.

The weather department has also said that Tamil Nadu, Puducherry, South Andhra Pradesh and north Sri Lanka coasts may get winds in the speed of 40-50 kmph gushing up to 60 kmph from December 8. The wind intensity may go up to 70-90 kmph between December 9 and 10. Cyclone Mandous Live Tracker Map on Windy: Cyclonic Storm Intensifies, Thunderstorms and Heavy Rains Likely Over Tamil Nadu, Andhra Pradesh From December 8; Check Real-Time Status.

P. Senthamaraikannan, Scientist, Regional Meteorological Centre while speaking to the media persons said, "The cyclone is expected to adversely impact the state as the wind and rainfall is likely to be severe on December 9th and 10th. "

The Tamil Nadu revenue department has also geared up for rescue operations as well as to clear water logging once the rain hits the state. Pumps and other machinery have been arranged under all the district administrations.

(The above story first appeared on LatestLY on Dec 08, 2022 11:33 AM IST. For more news and updates on politics, world, sports, entertainment and lifestyle, log on to our website latestly.com).