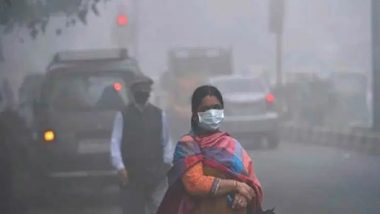 New Delhi, October 30: The Air quality in Delhi deteriorated even further and inched closer to 'severe' category on Friday with the rise of pollutants in the atmosphere. As per Central Pollution Control Board (CPCB) data, the Air Quality Index in Patparganj is at 404 i.e. in 'severe' category. Moreover, the Air Quality Index is at 408 in Anand Vihar, 447 in Bawana, 404 in Patparganj and 411 in Wazirpur; all four in 'severe' category, as per Central Pollution Control Board. The air quality further worsened primarily due to calm winds and spike in farm fires. Delhi-NCR Air Pollution: Centre Passes Ordinace to Improve Air Quality; Here Is All You Need to Know About the Ordinance.

On Thursday, the air quality largely remained 'very poor' in parts of Gautam Buddh Nagar, Ghaziabad, Gurgaon and Faridabad while it reached 'severe' levels at places in the National Capital Region. SAFAR said accumulation of locally generated pollutants and increased external intrusion due to north-north westerly boundary level winds from regions where stubble is burnt were the major factors for the increase in PM2.5 levels.

To tackle the persistent problem of air pollution in Delhi-NCR, the Centre has introduced a new law through an ordinance which comes into force with immediate effect. Under the ordinance released by the Ministry of Law and Justice on Thursday, the Environment Pollution (Prevention and Control) Authority (EPCA) has been dissolved and replaced by a commission comprising over 20 members. The members are yet to be selected.

(The above story first appeared on LatestLY on Oct 30, 2020 08:29 AM IST. For more news and updates on politics, world, sports, entertainment and lifestyle, log on to our website latestly.com).