Delhi-NCR Air Pollution: Centre Passes Ordinace to Improve Air Quality; Here Is All You Need to Know About the Ordinance

The Central Government on Thursday, published an ordinance called, 'The Commission for Air Quality Management in National Capital Region and Adjoining Area Ordinance,' aimed to improve the air quality in Delhi-NCR and combat the air pollution. It will have three sub-committees and all its members will be from Delhi-NCR area. 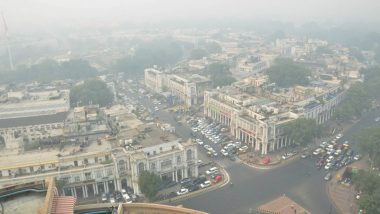 New Delhi, October 29: The Central Government on Thursday, published  an ordinance called, 'The Commission for Air Quality Management in National Capital Region and Adjoining Area Ordinance,' aimed to improve the air quality in Delhi-NCR and combat the air pollution. As per the ordinance, a commission will be put in place to coordinate among state governments in the NCR and carry out necessary steps to eliminate the problem of air pollution. Delhi' Air Quality Borders 'severe' Category.

The 20-member commission includes the Secretary of the Union Environment ministry, seniour officials from the states of Haryana, Punjab, UP, Rajasthan, and Delhi. It will have one technical member from the Central Pollution Control Board along with the representatives of NITI Aayog, various central ministries such as transport, urban affairs, and natural gas.

A selection committee under the Union Environment Minister will recommend the names for the commission's chairperson and other members.  The term of the chairperson is three years or until it attains the age of 70, whichever is earlier. All the members will be from Delhi and its neighbouring states. Delhi Air Pollution: Air Quality Deteriorates, AQI Remains in 'Very Poor' to 'Severe' Category in RK Puram, ITO, Lodhi Garden, Jahangirpuri Areas.

The Commission will also have three sub-committees for monitoring and identification, safeguarding and enforcement, and research and development respectively. All these are ultimately tasked to ensure proper air quality management in Delhi-NCR, ensuring better coordination among the states and undertake stringent measures to bring down the pollution levels in the area.

It can take actions and issue orders under the existing environment laws including the Air(Prevention and Control of Pollution) Act, 1981 and the Environment (Protection) Act, 1986. The non-compliance of the commission's directive will invite a jail term extending up to five years or a fine up to Rs 1 crore or both.

(The above story first appeared on LatestLY on Oct 29, 2020 03:59 PM IST. For more news and updates on politics, world, sports, entertainment and lifestyle, log on to our website latestly.com).