On the directions of CM Arvind Kejriwal, the Transport Department of the Delhi government has issued a gazette notification, stating full waiver on road tax on the battery-operated vehicles. 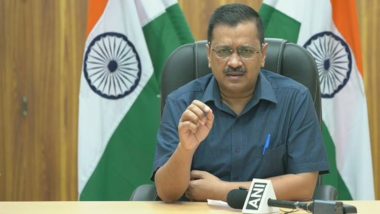 New Delhi, October 11: On the directions of CM Arvind Kejriwal, the Transport Department of the Delhi government has issued a gazette notification, stating full waiver on road tax on the battery-operated vehicles under the electric vehicle policy of the Delhi government. Also, suggestions from the public have been sought on the exemption on the registration fee and orders to waive off the fee will be issued in the next three days. Delhi Govt to Give Financial Incentives to Buyers of Electric Vehicles, Says CM Arvind Kejriwal.

As per the notification issued by the Transport Department, the rules issued in the policy for the exemption of registration fee have been opened for public opinion. The gazette says, "..the said draft will be taken into consideration after expiry of a period of three days from the date on which the copies of this notification as published in the Gazette of Delhi are made available to the public. Objections or suggestions in this behalf should be addressed to Secretary-cum-Commissioner (Transport), Government of National Capital of Delhi, Transport Department.."

The Delhi government led by CM Arvind Kejriwal has implemented the electric vehicle policy to promote the use of electric vehicles to reduce Delhi's air pollution. Thereafter, the Special Commissioner of Transport Department Shashi Kaushal has issued a notification with the order of the Lieutenant Governor of Delhi, under which tax exemption on all battery electric vehicles has been provided. This policy has come into force from the date of issue of this notification, i.e., road tax will not be paid on the electric vehicles starting 10th October 2020.

The Delhi EV Policy 2020 has been hailed as one of the most progressive EV policies in the world, which aims to have 25 percent of total vehicles as electric by 2024. It also focusses on the creation of employment in sectors such as driving, selling, financing, and charging of EVs, and heavy incentives for the rapid adoption of EVs. The policy was framed to adapt to the use of EVs, with an aim to reduce air pollution in the capital.