The CM further added that a scrapping incentive would also be given to those who exchanged their old vehicle, by a reduction in the price of the new EV. "All this will be added upon the financial incentives from the Central government's existing electric vehicle program," he said. 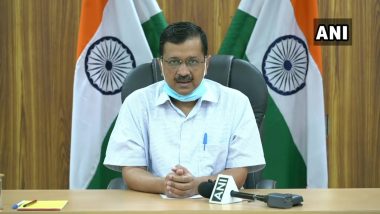 New Delhi, August 7: The Delhi government's new Electric Vehicle (EV) Policy aimed at boosting the economy and reducing pollution, Chief Minister Arvind Kejriwal said in a press conference on Friday. To encourage the usage of e-vehicles, the Chief Minister announced financial incentives for those who purchase e-vehicles for the next three years.

"This policy aims at tackling two main issues in Delhi - boosting the economy and reducing pollution. This is our country's most progressive policy and I believe that in the next five years, whenever people around the world talk about electric vehicles, Delhi's name will be at the top," he said. Electric Vehicle Policy Announced by Delhi Government, 5 Lakh EVs to Be Registered in Next Five Years.

"Unfortunately, pollution-causing vehicles are much cheaper than electric vehicles and are out of the reach of common people. Therefore, we have introduced a few financial incentives to encourage more people to buy. With the purchase of a two-wheeler, an e-rickshaw or freight vehicles, the Delhi government will give a benefit of up to Rs 30,000 and for a four-wheeler, a benefit of up to 1.5 lakh. For those who want to purchase electric vehicles for commercial purposes, loans will be given from the Delhi government at very low-interest rates, and registration and road tax fees will be waived. These incentives will be applicable for both battery strapping and fixed charging vehicles," he said.

The CM further added that a scrapping incentive would also be given to those who exchanged their old vehicle, by a reduction in the price of the new EV. "All this will be added upon the financial incentives from the Central government's existing electric vehicle program," he said.

The chief minister added that the policy was a product of two years of discussion and consultation from national and global experts. "This policy has not been made by officers sitting in an air-conditioned room. We spent over two years researching this issue with experts from India and around the world. A few gaps may emerge in this policy in the coming months, but this indicates the direction in which Delhi is headed - towards a cleaner and greener city with fresh air and blue skies. For now, this will be in place only for the next three years. we will make more improvements to the policy when required. A state EV fund is being created which will cater to the needs of this policy, and the EV board will be chaired by Kailash Gahlot, the Transport & Environment minister of Delhi," he said.

He further added that they hoped that by 2024, the percentage of newly purchased cars in Delhi would be 25 per cent, as compared to the current 0.2 per cent, and reach a goal of 200 charging stations across the city.