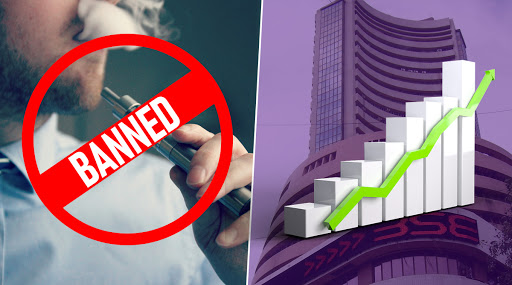 The Union Minister, while addressing a press conference on Wednesday, made it clear that the Central government has decided to ban production, manufacturing, import, export, transport, sale, distribution or advertisements of e-cigarettes. It also made these activities a cognizable offence.

Apart from the cigarette manufacturers, metal stocks were up with Tata Steel gaining by 3.7 percent, Vedanta by 3.1 percent and JSW Steel by 2.1 percent. Even Bharat Petroleum Corporation, IndianOil Corporation, GAIL, State Bank of India, Bharti Infratel and Tech Mahindra emerged as gainers in the stock market. E-Cigarettes Banned in India: FM Nirmala Sitharaman Announces Blanket Ban on Sale of Vaping.

However, FMCG leaders like Britannia continued with its downfall and saw a dip of 2.92 percent in its stock. Other losers for Wednesday were Indiabulls Housing Finance, Coal India, ONGC, Eicher Motors, HDFC Bank and Yes Bank. Though the BSE S&P Sensex closed 83 points and Nifty 50 inched up by 23 points, most investors remain in a pessimistic mood.