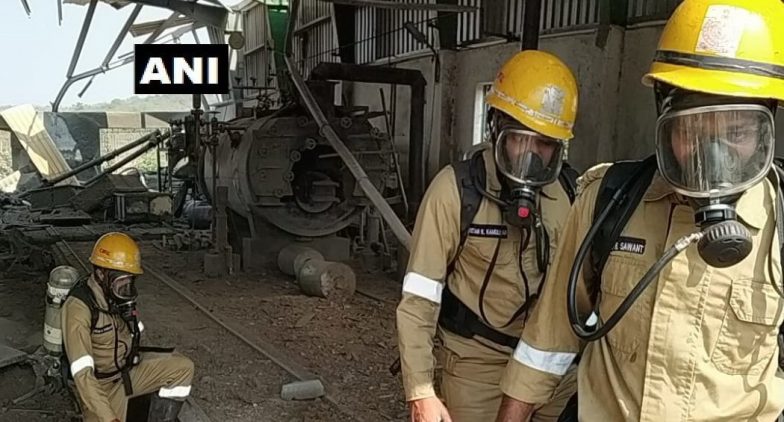 Tuem, January 13: One person has died and two are in critical condition following a blast in cement block factory at Tuem Industrial Estate in Goa. In the tragic accident, which took place on Saturday, nine people sustained injuries. Meanwhile, all the injured are admitted to the nearby hospital for treatment. Odisha: Explosion in Steel Plant of Maithan Ispat Limited Injures Five Workers, Two Critical Shifted to SCB Hospital.

According to reports, the incident took place 12:15 pm and led to a massive fire in the unit. Pernem Police Inspector Sandesh Chodankar told ANI, "The incident took place at around 12 noon. More than a dozen workers were present at the spot. All three workers who were seriously injured in the blast have been taken to Goa Medical College and Hospital. A case will be filed against the owner and management of the factory"

Goa: One of the three persons critically injured following a blast in a cement block factory at Tuem Industrial Estate yesterday, succumbed to his injuries at the hospital today. Total 9 persons were injured yesterday. pic.twitter.com/1iHQlD6oqP

Soon after the explosion, fire department personnel rushed to spot and doused the blaze. The estimated loss due to an explosion is reported to be Rs 25 lakh, which includes damages to the plant, a tempo, a car, and two bikes. The adjacent factories have also sustained damages due to blast.