A 30-year-old man allegedly raped a 10-year-old girl in Gujarat’s Bhavnagar district on Monday. The incident took place in Padva village of Bhavnagar’s Ghogha taluka. the accused is a farmer. 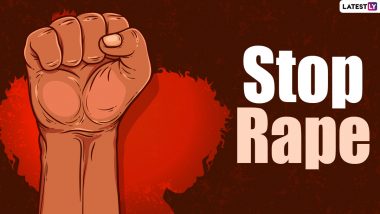 Bhavnagar, August 25: In another incident of sexual assault against minors, a 30-year-old man allegedly raped a 10-year-old girl in Gujarat’s Bhavnagar district on Monday. The incident took place in Padva village of Bhavnagar’s Ghogha taluka. On August 23, a religious feast was organised in the village. Children were also invited for lunch. The minor girl was also present at the feast. Thane Shocker: Man Forcibly Takes 11-Year-Old Girl to His House and Rapes Her, Assaults Her Mother.

The accused has been identified as Ajaysinh Gohil, and he is a farmer. As per a report published in The Times of India, after the girl had lunch, the accused lured her to a nearby room. He then allegedly raped the minor. After coming home, the girl narrated the entire incident to her parents. Gujarat: 22-Year-Old Youth Booked Under Sections of IPC & POCSO Act For Allegedly Raping 20-Year-Old Girl And Her Minor Sister in Rajkot.

Last month, a 14-year-old was allegedly raped by a man in Gujarat’s capital Ahmedabad. The incident took place on July 2 in the Asarwa area of the city when she was sleeping at her home. The accused lived in the neighbourhood of the girl. An FIR has been registered in the matter. The accused, who was reportedly in his twenties, was arrested by the police.

(The above story first appeared on LatestLY on Aug 25, 2021 11:33 PM IST. For more news and updates on politics, world, sports, entertainment and lifestyle, log on to our website latestly.com).