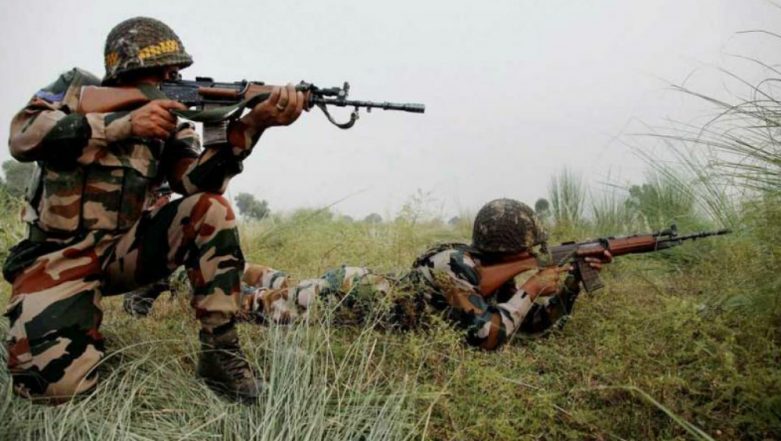 Jammu, August 20: An Indian Army jawan was martyred and four other soldiers were injured as Pakistan violated ceasefire along the Line of Control (LoC) in Poonch district of Jammu & Kashmir. The cross-border firing began at around 11 am on Tuesday, and was effectively retaliated to by the Indian side. No casualties were so far reported across the border.

Officials speaking to news agency PTI said the exchange of fire erupted in Krishna Ghati sector nearly an hour before noon. The Indian soldiers who have been injured have been shifted to the nearest medical facilities. Modi Targets Pakistan in Phone Conversation With Donald Trump, Says 'Incitement to Anti-India Violence Not Conducive to Peace'

News agency ANI has confirmed the demise of at least one soldier who was caught in the line of fire. The deceased has been identified as Naik Ravi Ranjan Kumar Singh.

Jammu and Kashmir: A jawan of the Indian Army lost his life in ceasefire violation by Pakistan Army, in KRISHNA GHATI sector today. pic.twitter.com/2FHelCAiOo

The fatal exchange of fire between Indian and Pakistani forces comes amid high-pitched rhetoric between the two sides. Tensions soared between the neighbouring nations since August 5, when New Delhi revoked Jammu & Kashmir's special status.

Alleging a ploy to rejig Kashmir's demography, Pakistan Prime Minister Imran Khan said he would petition all multilateral global bodies to intervene in the issue.

Addressing a gathering in Pakistan-occupied-Kashmir, Khan said he has received specific inputs that India may "launch a military operation" to annex "Azad Kashmir" -- the reference used by Islamabad for PoK.