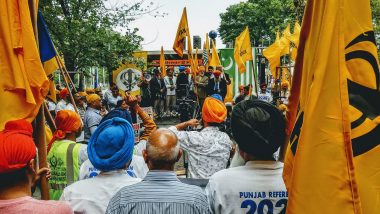 New Delhi, July 5: The Centre on Sunday banned 40 websites of pro-Khalistan group Sikhs For Justice (SFJ). The SFJ was using the Russian portal for online voter registration for "Referendum 2020" to demand Khalistan, a separate homeland for the Sikhs. The security has also been tightened in Punjab after the pro-Khalistan organisation announced to conduct “Referendum 2020”. Sikhs For Justice Banned by Indian Government For Pushing 'Referendum 2020'; Captain Amarinder Singh Welcomes Decision.

The Ministry of Home Affairs in a statement said, “Sikhs For Justice, an unlawful org under Unlawful Activities (Prevention) Act, 1967, launched a campaign for registering supporters for its cause. On recommendation of MHA, Electronics and Info Tech Ministry has issued orders under IT Act, 2000, for blocking 40 websites of SFJ.” Punjab: Pro-Khalistan Outfit Member Pannun, Associates Charged with Sedition.

Sikhs For Justice, an unlawful org under Unlawful Activities (Prevention) Act, 1967, launched a campaign for registering supporters for its cause. On recommendation of MHA, Electronics&Info Tech Ministry has issued orders under IT Act, 2000, for blocking 40 websites of SFJ: MHA pic.twitter.com/O2RcWRxTf6

The SFJ had launched the "Referendum 2020" voter registration through the Russian website www.punjabfree.ru. The organisation claimed that it had distributed 10,000 voter registration forms throughout Punjab in a day. According to reports, the SFJ chose July 4 to launch the campaign in memory of Sikhs killed during the 1955 attack at Darbar Sahib. Hard Kaur Joins Banned Group Sikhs for Justice’s Referendum 2020 Drive, Appeals to People to Vote for Khalistan.

The secessionist group failed to get support for its anti-India effort through the voter registration for Referendum as police vehicles in large numbers and policemen in plain clothes were deployed in Golden Plaza and other areas to foil any attempt disturbing the country's peace and violating law and order, an official said.

On July 1, 2020, SFJ's lead campaigner Gurpatwant Singh Pannun was declared a terrorist by the Central government under the Unlawful Activities (Prevention) Act for trying to revive militancy in Punjab. Last year, the Centre banned the SFJ. The union cabinet declared it as an unlawful association.

(The above story first appeared on LatestLY on Jul 05, 2020 07:25 PM IST. For more news and updates on politics, world, sports, entertainment and lifestyle, log on to our website latestly.com).