After being booked for sedition last month, Punjabi rapper Taran Kaur Dhillon aka Hard Kaur has joined the “Referendum 2020” campaign run by the pro-Khalistan group Sikhs for Justice (SFJ) for a separate homeland for Sikhs in Punjab. 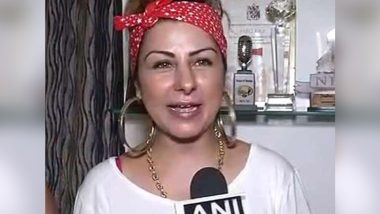 In a series of videos posted on social media three days ago, Punjabi singer can be seen supporting Referendum 2020 and appealing to people to vote for Khalistan. In another Instagram post, Kaur can be seen wearing a “Punjab Referendum 2020 Khalistan” t-shirt. She also praised the slain militant leader Jarnail Singh Bhindranwale. Hard Kaur Faces FIR For Comments Against UP CM Yogi Adityanath and RSS Chief Mohan Bhagwat.

Tagging Punjab Chief Minister Captain Amarinder Singh and Shiromani Akali Dal (SAD) president Sukhbir Singh Badal in a post, Kaur, in another video, is seen urging Sikhs to vote for Khalistan and asked them not to be fooled by those who oppose it.

(The above story first appeared on LatestLY on Jul 18, 2019 08:42 AM IST. For more news and updates on politics, world, sports, entertainment and lifestyle, log on to our website latestly.com).