ISRO Successfully Launches India’s Heaviest and Most Powerful Satellite GSAT-11 From French Guiana; All You Need to Know 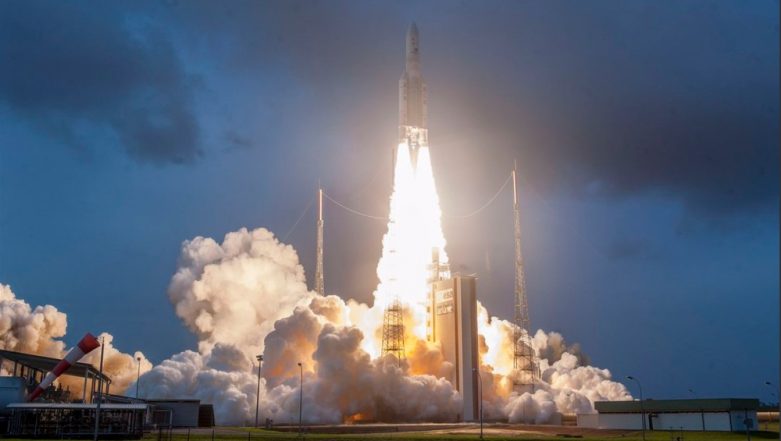 Bengaluru, December 5: The Indian Space Research Organisation (ISRO) on Wednesday successfully launched GSAT-11, India's heaviest satellite on board an Arianespace rocket from the French Guiana. The satellite blasted off from the Ariane Launch Complex in Kourou, a French territory located along the northeastern coast of South America. The launch was broadcast live on Doordarshan. ISRO Successfully Launches HysIS, India’s Earth-Mapping Satellite on PSLV-C43 From Sriharikota.

Reports inform that the GSAT-11 satellite is aimed to boost broadband services by providing something like 16 Gbps data link services to the country. ISRO claimed that the satellite is the heaviest and most-advanced high throughput communication satellite. "The heaviest, largest and most powerful satellite ever built by India is successfully launched by Ariane-5 today," ISRO Chairman K Sivan said soon after the launch. GSAT-11: ISRO Set to Launch India's Heaviest Communication Satellite in Space.

Take a look at the video of Ariane 5 VA-246 lift off from Kourou Launch Base:

Sivan added saying that the GSAT-11 satellite is a next generation "high throughput" communication satellite configured around the ISRO's I-6K Bus with a designed lifetime of more than 15 years. According to ISRO, the satellite will provide high data rate connectivity to users of the Indian mainland.

Here's all you need to know about the GSAT-11 satellite:

The satellite will be initially placed in the Geosynchronous Transfer Orbit and later raised to Geostationary Orbit by firing the on-board Liquid Apogee Motor. After the separation phase, ISRO's Master Control Facility at Hassan, in Karnataka, took over the command and control of GSAT-11 and found its health parameters normal, the space agency said in a statement.