'It's a Miracle': Gujarat Farmer, Who Lost His Only Working Eye in Cyclone Tauktae, Regains Vision After Surgery

Nanu Savaliya, a farmer, was working in his farm when some sharp metallic pieces flew due to strong winds, triggered by Cyclone Tauktae, and pierced his only working eye. 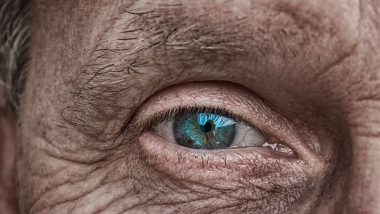 Ahmedabad, July 28: Nanu Savaliya, a farmer from Gir-Somnath district of Gujarat, was staring at life-long blindness after losing vision of his only working eye due to Cyclone Tauktae in May. Nanu Savaliya had lost one eye during childhood and had vision only in one. But Savaliya has now regained vision in the eye lost during Cyclone Tauktae following a complicated surgery. Krishnapatnam Medicine: Distribution of Ayurvedic Medicine Touted As Miracle Cure for COVID-19 Indefinitely Suspended.

Savaliya was working in his farm when some sharp metallic pieces flew due to strong winds, triggered by Cyclone Tauktae, and pierced his only working eye. While his family has lost all hopes, doctors in Ahmedabad's Netralaya Hospital performed a complicated surgery to bring colours back in Savaliya's life. His vision lost due to the cyclone returned to normal on July 26. 'Miracle Baby Goat': Goat Gives Birth to Kid With 8 Legs and 2 Hips in West Bengal.

"His cornea was torn and had vitreous hemorrhage along with traumatic cataract. The situation was very delicate and three doctors were required for as many surgeries as multiple parts of Savaliya’s eye were damaged," Dr Parth Rana of Netralaya Hospital, who performed the surgery, was quoted by TOI as saying. Savaliay said it is a miracle that he can see again.

Doctors used 3-D technology that enables doctors to see the eye and interiors almost 100 times magnified to perform the delicate surgery. "Such surgeries are not rare but difficult. Due to 3-D technology, it could be performed in a single sitting. We are gad that he has regained vision," Dr Rana said.

(The above story first appeared on LatestLY on Jul 28, 2021 12:37 PM IST. For more news and updates on politics, world, sports, entertainment and lifestyle, log on to our website latestly.com).