After a verbal slugfest between Bollywood actress Kangana Ranaut and Shiv Sena leader Sanjay Raut, the Congress on Monday said that it respects her right to dissent but criticised her Mumbai-PoK comment. 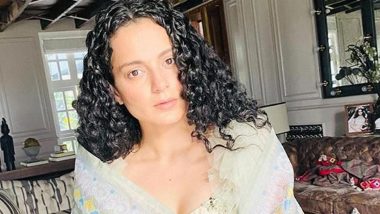 New Delhi, Sep 7: After a verbal slugfest between Bollywood actress Kangana Ranaut and Shiv Sena leader Sanjay Raut, the Congress on Monday said that it respects her right to dissent but criticised her Mumbai-PoK comment.

The Congress is an alliance partner in the Maha Vikas Aghadi government in Maharashtra, along with the Shiv Sena and the Nationalist Congress Party. What is Y Level Security? Here's All About the Y+ Security Protection Given to Actor Kangana Ranaut by Centre.

"Unlike Modi ji and the BJP, I will defend the right to dissent of the biggest critic of mine -- that is the principle of the Congress and of the alliance partners in Maharashtra, the Shiv Sena and the NCP," Congress chief Spokesperson Randeep Singh Surjewala said at a press conference.

The Congress leader slammed Kangana for comparing Mumbai to Pakistan-occupied Kashmir (PoK) and said that it is "politically motivated".

"Despite a particular film actress carrying on the agenda of Modi ji and the BJP, she will be given adequate protection," added Surjewala.

But, the Congress leader said, describing the business capital of India as PoK is "naive, incorrect and politically opportunistic, and reprehensible". The party said it rejected such allegations and politically motivated statements.

The Congress also slammed the media for turning their eyes away from the crises of coronavirus, unemployment in the country and floods in Bihar and other places.

Kangana had courted a controversy with a series of comments against the Mumbai Police, Maharashtra, film industry and related issues, that has caused major political row in the state.

As the controversy snowballed, Kangana dragged in the Palghar lynching incident, labelled Mumbai as "addicted to blood", dared the Maratha pride of Maharashtra, made allegations of an 'Islam-dominated' Bollywood, besides comparing Mumbai to PoK.

(The above story first appeared on LatestLY on Sep 07, 2020 01:59 PM IST. For more news and updates on politics, world, sports, entertainment and lifestyle, log on to our website latestly.com).