Wistron, which had reported an estimated loss amounting over Rs 440 crore in December 12 violence at the company's plant in Karnataka, has now claimed it suffered losses up to nearly Rs 52 crore. 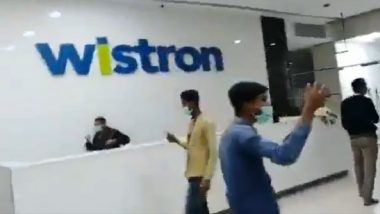 Bengaluru, December 16: Taiwanese Wistron Corporation, which had reported an estimated loss amounting over Rs 440 crore in December 12 violence at the company's plant in Karnataka's Kolar district, has now claimed it suffered losses up to nearly Rs 52 crore. Wistron, which assembles Apple iPhones at its Kolar unit, has informed the Taiwan Stock Exchange that the preliminary estimates of damages is in the range of 100 to 200 million New Taiwan Dollar (the local currency), TOI reported. It is nearly Rs 52 crore. Toyota Kirloskar Unit in Bidadi Remains Shut as Workers Continue Strike Over 'Additional Workload, No Bathroom Breaks'.

The Taiwanese company also said that the violence did not cause any material damage to major manufacturing equipment and warehouses. However, in its complaint to the local police, had said that assembly line and other equipment were damaged by the workers at its unit in Narasapura Industrial Area. Karnataka Labour Minister Shivram Hebbar told TOI that the Rs 437 crore figure was reported by the company.

"It was the company that filed an FIR and it is only the company that can say why it filed a revised loss of $7 million or Rs 50 crore. But whatever may be the loss, the violence resorted to by the agitators cannot be tolerated or supported. It does not augur well for the state when it tries to attract fresh investment," Shivram Hebbar was quoted as saying. On December 12, a large number of workers went on a rampage over issues related to payment of salary.

It was reported based on Wistorn's complaint that thousands of iPhones were stolen during the violence. Established on 43 acres, Wistron's iPhone manufacturing plant in Kolar is around 60 km from Bengaluru. The facility is reportedly used to manufacture Apple's smartphone iPhone SE, Internet of Things (IOT) products and biotech devices.

(The above story first appeared on LatestLY on Dec 16, 2020 05:35 PM IST. For more news and updates on politics, world, sports, entertainment and lifestyle, log on to our website latestly.com).