Wistron Corporation has reported an estimated loss amounting Rs 440 crore in violence which had erupted on December 12 at the company's plant in Karnataka's Kolar district, where it assembles iPhones. 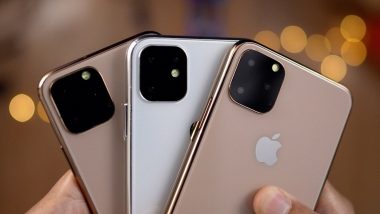 Bengaluru, December 14: Taiwanese Wistron Corporation has reported an estimated loss amounting Rs 440 crore in violence which had erupted on December 12 at the company's plant in Karnataka's Kolar district, where it assembles iPhones. In its complaint to the police, Wistron Corporation said thousands of iPhones were stolen during the violence which had broken out after a large number of workers went on a rampage over issues related to payment of salary. Political Parties Seek Thorough Probe into Violence at Wistron Plant in Karnataka.

Wistron also said that the company's assembly line and other equipment were damaged by the workers. Videos that surfaced online showed a violent group overturning vehicles, setting them on fire, breaking glass windows in the office leaving a trail of destruction. Located in Narasapura Industrial Area, the Taiwanese Wistron Corporation manufacturing facility is touted to be the country's first iPhone manufacturing plant. Karnataka Deputy CM Condemns Wistron Violence in Kolar District.

The dispute between Wistron and the contract labourers has been going on for three months, the government has said. Karnataka Labour Minister Shivaram Hebbar said Wistron had contracted six subsidiary companies to hire 8,900 people for its Kolar unit. Speaking to a leading daily, state's Industries Minister Jagadish Shettar said miscommunication between Wistron, the contractors and the employees may have triggered the violence.

Established on 43 acres, Wistron's iPhone manufacturing plant in Kolar is around 60 km from Bengaluru. The facility is reportedly used to manufacture Apple's smartphone iPhone SE, Internet of Things (IOT) products and biotech devices. The Karnataka government has strongly condemned the violence and over 100 accused have been detained.

(The above story first appeared on LatestLY on Dec 14, 2020 08:28 AM IST. For more news and updates on politics, world, sports, entertainment and lifestyle, log on to our website latestly.com).