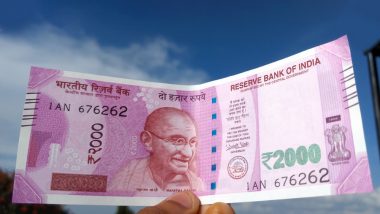 Mumbai, February 10: A top public sector bank has reportedly issued instructions to senior management to keep Rs 2,000 notes out of circulation and also not stock it at the bank's ATMs, according to a Business Insider report. However, the report states that there is no reason for the customers to panic as bank employees were told to accept Rs 2,000 from individuals making a deposit.

The bank has been told to ensure that denomination of Rs 500, Rs 200 and Rs 100 are only loaded in the ATMs. In October last year, a message went viral on social media, especially onTwitter, claiming that the Reserve Bank of India (RBI) will ban Rs 2000 notes from January 2020. The viral message further claimed that people would be allowed to exchange Rs 2000 note worth Rs 50,000 in 10 days once the RBI withdraws them. RBI to Ban Rs 2000 Notes And Release New Rs 1000 Notes on January 1, 2020? Viral Messages Fact-Checked.

(The above story first appeared on LatestLY on Feb 10, 2020 03:10 PM IST. For more news and updates on politics, world, sports, entertainment and lifestyle, log on to our website latestly.com).