An eight-year-old boy was mauled to death by a leopard in Budgam district of Jammu and Kashmir. 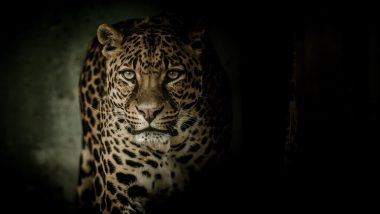 Srinagar, September 19: An eight-year-old boy was mauled to death by a leopard in Budgam district of Jammu and Kashmir. The leopard attacked the boy late on Friday (September 17). Locals followed the blood trail and recovered the boy. He was rushed to a hospital where doctors declared him brought dead. This is the second incident in three months in Budgam when a child died in the leopard attack. Jammu and Kashmir: Missing 4-Year-Old Girl Mauled to Death by Leopard in Budgam, Body Parts Found in Nearby Nursery.

The boy was on his way to his aunt’s house at Hari Pora Haran in Soibugh when a leopard took him away, according to a report by Hindustan Times. The villagers heard his screams and immediately launched a search. They found him lying injured in the nearby plantations. "The boy was quickly retrieved by the villagers and taken to hospital where doctors declared him brought dead," Range Officer (Wildlife) Sajid Farooq was quoted as saying. Jammu and Kashmir: Bear Mauls Man to Death in Budgam Forests.

Following the incident, forest officials geared up to catch the leopard that attacked the victim. "We have already installed a cage and are in the process of installing another. We are ascertaining its movement pattern and determining its track," Farooq said. He also urged people not to let kids go out alone in early mornings and evenings.

This is the second such incident in three months in Budgam district. In early June, a four-year-old girl was taken away by a leopard when she was playing in the lawn of her house at Ompura Housing Colony. Her body was later found in a forest nursery. The incident had caused outrage in the Valley and the administration captured the leopard that killed the girl.

(The above story first appeared on LatestLY on Sep 19, 2021 02:45 PM IST. For more news and updates on politics, world, sports, entertainment and lifestyle, log on to our website latestly.com).