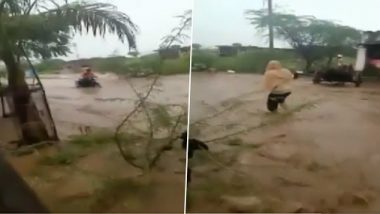 Mumbai, July 4: The heavy rainfall in Mumbai and adjoining places have filled the road with rainwater. Even flash floods could be experienced in some parts of the Maharashtra state. In an incident, a motorbike rider was caught in a flash flood in Dhule district and was later saved by the locals. However, the video went viral.

According to a video, uploaded on social media by the news agency ANI, the motorbike rider could be seen trying to cross the flooded street. To do so, he attempted to race his motorbike and lost his balance. Following this, he could be seen shouting for help as his bike was about to wash away. Later, locals rushed to help the motorbike rider. Mumbai Rains: Heavy Rainfall Likely During Next 48 Hours, IMD Asks Citizens to Stay Away from Sea Shore Amid High Tide Warning.

#WATCH Maharashtra: A motorbike rider gets caught in a flash flood in Dhule district. Locals come to rescue. pic.twitter.com/kEoFP4KSyY

Meanwhile, the civic authorities on Saturday reported two incidents of the wall collapse in Thane city. No casualties were reported in both these incidents. Earlier on Thursday, IMD had issued an orange alert for next two days, predicting heavy to very heavy rainfall at isolated places in Mumbai and adjoining coastal districts.

(The above story first appeared on LatestLY on Jul 04, 2020 03:37 PM IST. For more news and updates on politics, world, sports, entertainment and lifestyle, log on to our website latestly.com).