Ahead of assembly elections in the neighbouring states of Punjab and Uttar Pradesh, the Haryana government on Monday issued an order directing state government employees to refrain from participating in poll campaigns. 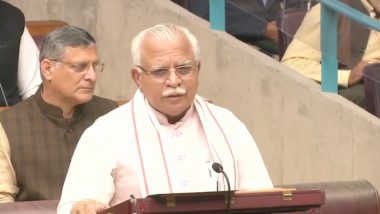 The state government in its order said, “No Government employee shall be a member of, or be otherwise associated with, any political party or any Organization, which takes part in politics, nor shall take part in, or subscribe in aid of, or assist in any other manner, any political movement or activity.” Haryana Govt Extends Ban on Sale and Manufacture of Gutkha, Pan Masala Till September 2022.

It further added, “It shall be the duty of every Govemment employee to endeavour to prevent any member of his family from taking part in or subscribing in aid of or assisting in any other manner, any movement or activity which is, or tends directly or indirectly to be subversive of the Government as by law established.” Krishna Utsav To Be Organised In Haryana To Promote Tourism in The State.

As per the order, the display by a Government employee on his person, vehicle or residence of any electoral symbol shall amount to using his influence in connection with an election within the meaning of this sub-rule. State government employees are also not allowed to join or continue to be a member of an association, the objects or activities of which are prejudicial to the interest of the sovereignty and integrity of India or public order or morality.

(The above story first appeared on LatestLY on Oct 11, 2021 07:04 PM IST. For more news and updates on politics, world, sports, entertainment and lifestyle, log on to our website latestly.com).