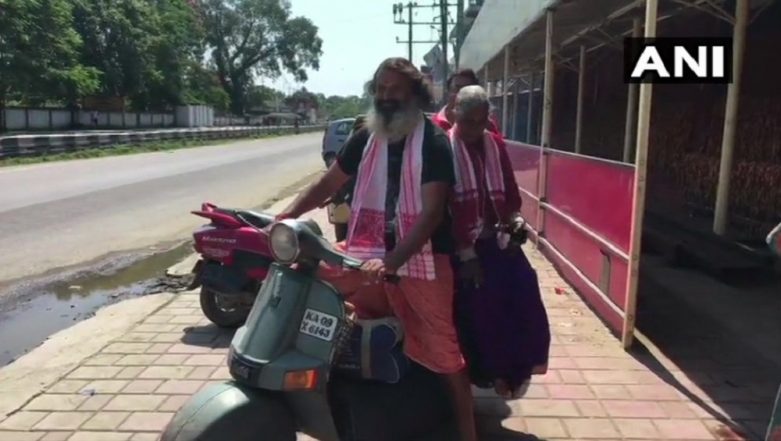 Tinsukia, July 1: Forty-year-old D Krishan Kumar who had embarked on an unusual pilgrim expedition with his mother riding pillion on his scooter has so far managed to cover a total of 17 holy places across the country and few outside it. The duo has logged a total of 40,380 kilometres visiting pilgrimage centres in all the southern states and a few states up north and even visited Nepal and Bhutan over a period of one and a half years. Next stop for them is Parshuram Kund in Arunachal Pradesh. Riding on a Bajaj Chetak scooter, the modern-day 'Shravan Kumar' has carried his 70-year-old mother Choodarathna to all the places.

"I am fortunate to have a son like Krishan, he has been taking care of me since my husband passed away. It's difficult to find a son like him in today's world" Choodarathna told ANI. Krishan calls this excursion as 'Mathru seva sankalpa yatra', where he is trying to fulfil his mother's dream of travelling all the prime pilgrim spots across the country. Mother's Day 2019: History, Significance And Celebrations Related to the Day That Celebrates Moms and Motherhood!

D Krishna Kumar With His Mother

Assam: D Krishna Kumar, a resident of Mysuru, Karnataka who has been travelling to various holy places with his 70-year-old mother on a scooter, has reached Tinsukia recently. He says,"this is ‘mathru seva sankalpa yatra’& we started this journey on January 16, 2018 from Mysuru." pic.twitter.com/ZUvki8H5dp

"We started this journey on January 16, 2018. Starting from Kerala, we have covered many other states including Tamil Nadu, Pondicherry, Karnataka, Andhra Pradesh, Telangana, Maharashtra, Goa, Chhattisgarh, Odisha, Jharkhand, Bihar, West Bengal, Sikkim, Nepal, Bhutan and currently we are here, in Assam and our next pilgrim spot is Parshuram Kund in Arunachal Pradesh," Kumar told ANI.

Krishan who worked as a corporate team leader in Bangalore for 13 years, transferred his lifetime earnings to his mother's account before commencing this journey. He says he has been able to cover the expenses incurred on the journey through the interest amount received from the bank.

During the pilgrim tour, this duo says it received immense love and respect from other tourists. Krishan's father passed away four years ago and since then he has been standing as the strongest pillar for his mother, fulfilling all her needs and dreams.

Sharavan Kumar is a mythological character from epic Ramayana, who fulfils the wish of his old and blind parents to go on a pilgrimage, by carrying them in two baskets hanging from two ends of a staff slung over his shoulder.