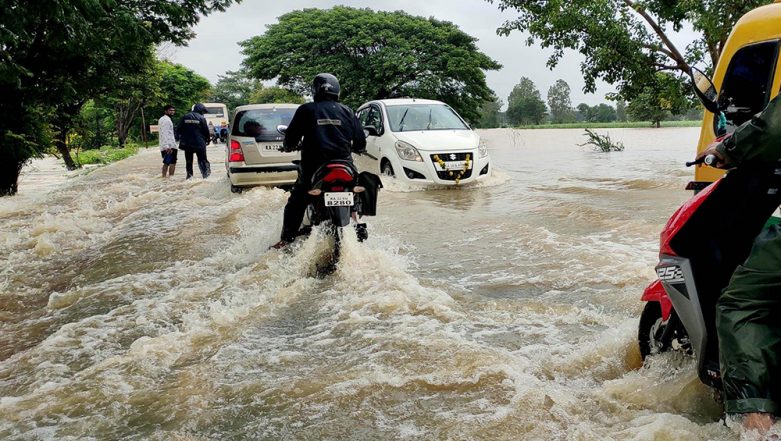 New Delhi, August 8: With the monsoon getting stronger in most parts of the country, several states of India are reeling under severe flood conditions. The torrential rains across the states wreaked havoc, flooding villages and towns and disrupting normal life. The monsoon activity has now gained momentum and maintained its intensity to lash especially the coastal states including Kerala, Karnataka, Maharashtra since July. Though the monsoon played truant in June, it gained momentum in July and August, bringing relief to the people from acute drought last year. Monsoon 2019: IMD Predicts Nationwide 'Normal' Rainfall For June to September Period.

Torrential rains continued to batter large swathes of the country especially since July. According to the Indian Meteorological Department (IMD), there is a formation of a depression over the northwest Bay of Bengal, which will lead to heavy rainfall in the western and southern parts of the country.

Heavy rainfall continued to wreak havoc in Maharashtra since the last week of July. The incessant rainfall created flood-like situation in the state, causing inconvenience to Mumbaikars, as rail, air and road transport was drastically hit. As per government’s record, a total of 132,360 people of 28,397 families have been evacuated from Sangli, Satara, Pune, Kolhapur, and Solapur districts.

Earlier this week NDRF teams had rescued about 300 people in Walva, Shirgaon, Nandre, Kasbe Digris in Sangli district. They had also rescued about 475 people in Khutwad, Ambewadi, Chikhli in Kolhapur district. Floodgates were opened in the dams in Maharashtra and barrages and reservoirs in Karnataka, where road and rail links remain hit by incessant monsoon rains.  IMD Predicts Active Rainfall Over South Konkan.

The road communication between Sangli and Kolhapur and between Kolhapur and Belgaum (in Karnataka) has been affected. According to reports, all the dams in state are overflowing, and if the catchment areas of dams receive more rain, possibility of more floods cannot be ruled out. The Krishna river is in spate, so the water from its two tributaries including the Panchganga (which flows through Kolhapur) is not flowing into the Krishna, creating the present flood situation.

While several parts of the country received heavy rainfall during the last week, bringing some respite from the scorching heat. In the last week,  the Delhi-NCR region received an intense spell owing to strong monsoon activity.  The weather department has forecast generally cloudy skies with a possibility of light to moderate rains in the coming days. While some parts of the capital city received heavy rainfall, others only witnessed a drizzle.

Incessant rains pounded several districts of Kerala which prompted the IMD to issue a red alert in several districts of the state. Owing to heavy rainfall, a red alert was sounded in Idukki, Malappuram and Kozhikode districts on August 8. As per a weather bulletin by IMD, these districts are likely to get extremely heavy rainfall of over 240 mm in 24 hours and may experience landslides in the coming days. Also, an orange alert in various districts from August 6 to 9, includingin Malappuram, Kozhikode, Kasargod, Alapuzha, Idukki, Ernakkulam, Kannur and Thrissur districts.

Flood situation continued to remain grim as heavy rainfall continued to cripple normal life in the state. The floodgates were opened in the dams in neighbouring Maharashtra and barrages and dams in Karnataka, where road and rail links remain affected. The swollen Bhadra river completely submerged the Hebbale bridge that connects Horanadu.

In Karnataka, Belagavi, Bagalkote and Yadgir bore the brunt of the heavy downpour and water released from dams on Krishna river and its tributaries. Areas including Belagavi, Bagalkote, Vijayapura, Raichur and Yadgir had been battered by the floods in Udupi, Chikkamagaluru, Mangaluru, Kodagu, Hubballi-Dharwad, Karwar, Hassan and Shivamogga. The death toll due to rain-related incidences in Karnataka jumped to five on August 8.

Parts of north and coastal areas along with the Malnada region continued to reel under heavy downpour. Government schools in Belagavi turned into rehabilitation centres where the flood-hit people shared their rooms with the livestock. Chikkamagaluru district too was badly hit by the torrential rain.

Flood-like situations were seen in Gujarat after the state was lashed by heavy rainfall during the last week of July. According to IMD, heavy to very heavy rainfall is expected on the (August) 9th and 10th. Reports inform that teams of the National Disaster Response Force (NDRF) have been positioned at vulnerable positions and also alerted the administration regarding the same.

Gujarat has registered over 46 per cent of the average monsoon rains so far after Vadodara and Rajkot received very heavy rains during the last week. The torrential downpour, saw a record breaking 499 millimeters (mm) of rainfall in Vadodara city in just 18 hours.

Bihar saw the worst floods this year. According to the disaster management department, over 130 people were killed while over 8.5 million were affected by the floods. Thousands have been displaced across the state's 13 districts as rivers are flowing above the danger mark at several places. Bihar Chief Minister Nitish Kumar ha said that the state government is providing Rs 6,000 financial aid to the flood victims under the Public Financial Management System.

The rainfall activity has strengthened across India. In its forecast for August and September, the IMD has predicted normal rainfall over the next 60 days. As per the forecast, August will witness 99 per cent of the long period average (LPA) rains, with an error margin of plus or minus 9 per cent. September, which is the final month of Monsoon, is predicted to receive 100 per cent of the average rainfall. The LPA of the rainfall over the country as a whole for the second half of the monsoon season (August to September) based on the 1961-2010 period is 42.83 cm.