The Election Commission, on Thurday, sought the removal of Munger's DM and SP over the firing incident on October 26 during the Durga Idol immersion. The Munger police took out a march in response of attack on SP and SDO office by the mob protesting against the police firing incident that killed a 18-year-old and left several injured. 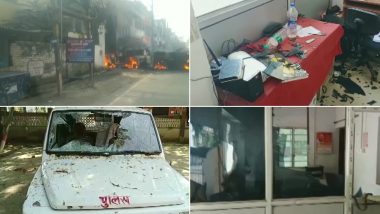 Munger, October 29:  The Election Commission, on Thursday, ordered immediate removal of the DM and SP of Munger in Bihar over the violence during the immersion of Goddess Durga in the city on October 26.  The police claimed that during the idol immersion "some ant-social elements" threw stones at them and the police had to retaliate with lathi charge. The incident lead to the death of an 18-year-old boy and left several other devotees injiured. Tejashwi Demands High Court-monitored Probe in Munger Firing Incident.

Earlier today, the Munger Police conducted a flag march after the mob, protesting against the violence that killed a person during idol immersion, vandalised the office of SDO and SP.  Bihar ADG Jitendra Kumar said, "Munger incident is under investigation. Clashes erupted due to pace of idol immersion."  Munger Lathi Charge & Police Firing: Man Killed, At least 20 Injured In Firing During Idol Immersion In Bihar Ahead Of Polling.

The mob was protesting against a man's death during firing incident on Oct 26 at the time of Goddess Durga immersion & demanded action against Munger SP & SDO pic.twitter.com/0VFC7nIMfi

Congress's Randeep Singh Surjewala hit out at Bihar CM Nitish Kumar over the incident and said, "Firing and lathi-charge on devotees of Maa Durga in Munger were done at the behest of Nitish Kumar-Sushil Modi government... There is arson and lawlessness, and Nitish Kumar is to be held responsible."  RJD's Tejashwi Yadav had also demanded a high-court monitored probe of the incident.

(The above story first appeared on LatestLY on Oct 29, 2020 04:51 PM IST. For more news and updates on politics, world, sports, entertainment and lifestyle, log on to our website latestly.com).