Nirav Modi's 13 Cars Put on Auction in Mumbai by ED, Rolls Royce Among Them

Enforcement Directorate put 13 cars of fugitive diamantaire Nirav Modi in an online auction in Mumbai. Also, one of his most premium car - Rolls Royce - originally worth Rs 5 crore, is up for grabs at a starting price of Rs 1.3 crore. 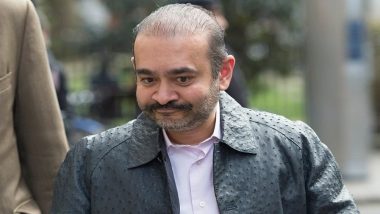 Mumbai, April 25: Days after destroying his Alibagh's house, the Enforcement Directorate on Thursday put 13 cars of fugitive diamantaire Nirav Modi in an online auction in Mumbai. Also, one of his most premium car - Rolls Royce - originally worth Rs 5 crore, is up for grabs at a starting price of Rs 1.3 crore in Mumbai.

Among the 13 cars that are for sale of include Rolls Royce Ghost, Porsche Panamera, two Mercedes Benz, three Honda, Toyota Fortuner, an Innova, and two Honda Brios. These cars are up for sale after ED was authorised by a special court in Mumbai to auction Nirav Modi's seized cars after the Rs 13,000 crore Punjab National Bank (PNB) scam came to the fore, reports India Today.  Nirav Modi's Extradition Hearing To Begin After May 30.

The report states that though the bidders were allowed to bid and inspect the vehicles from April 21 to April 23, they were not allowed to take the vehicles for a test drive. To get a better idea of the condition of the cars, photographs of the 13 vehicles have been uploaded on the site of Metal Scrap Trade Corporation Limited (MSTC) by the ED.

The MSTC site also had mentioned other details which include starting price, location of inspection, registration number, and model also find a mention. Even the contact for the auction has been given to MSTC.

This is not the first time, ED had put Nirav Modi's assets for auction. Earlier, paintings of Nirav Modi had gone under the hammer and fetched over Rs 54 crore for the income tax department. IT Department had sold 55 of the 68 paintings put up for auction at the Saffron Art gallery in Mumbai. Currently, Modi is undergoing extradition proceedings in the UK in the PNB fraud and money laundering case.

(The above story first appeared on LatestLY on Apr 25, 2019 09:56 PM IST. For more news and updates on politics, world, sports, entertainment and lifestyle, log on to our website latestly.com).