Nirbhaya Case: New Death Warrant Issued, All Four Convicts to be Hanged at 6 AM on March 3, 2020 in Delhi's Tihar Jail

The Patiala House Court was hearing a plea seeking the issuance of a new death warrant against the four individuals convicted in the 2012 Delhi gang-rape and murder case. In all there were 6 convicts, one of the five adults accused, Ram Singh, had allegedly committed suicide in the Tihar Jail during the trial of the case. 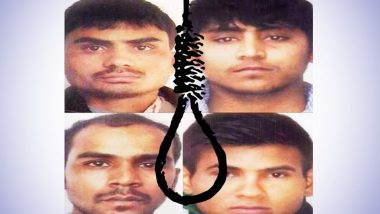 New Delhi, February 17: The four convicts in the 2012 Nirbhaya rape and murder case will be hanged at 6 am on March 3, 2020, the Delhi Court said in its order on Monday. The fresh date for execution of death warrant against all the four convicts was issued by Additional Sessions Judge Dharmender Rana during the hearing in the Patiala House Court today. In the last month, the trial court had issued death warrants again with execution date as February 1 at 6 am. According to the new death warrant, the four convicts in the case -- Mukesh Kumar Singh (32), Pawan Gupta (25), Vinay Kumar Sharma (26) and Akshay Kumar (31), who are lodged in Tihar Jail, will be executed on March 3 at 6 am. Nirbhaya Case Timeline: Chronology of Events in the 2012 Gangrape and Murder Case.

Earlier in the day during the hearing, Prosecutor Rajeev Mohan had urged the Court to issue a date for execution as no legal proceedings were pending before any fora. Mohan apprised the court about the current status of the case and also states that out of 4 convicts, 3 have already exhausted their legal remedies. The Court also discharged Advocate Vrinda Grover as convict Mukesh’s counsel after convict Mukesh showed unwillingness to continue her in the case. Advocate Ravi Qazi has now been appointed as a counsel for convict Mukesh.

A Delhi court was adjourned for February 17 the hearing on the plea of the state and Nirbhaya's parents seeking issuance of death warrant as a petition challenging the rejection of mercy plea of convict Vinay Kumar Sharma was pending before the top Court. The Patiala House Court had observed that Article 21 of the Constitution protects the life and liberty of the convicts till the last breath of life.

In all there were 6 convicts in the case, one of the five adults accused, Ram Singh, had allegedly committed suicide in the Tihar Jail during the trial of the case while one was a minor, at the time of the incident. The Nirbhaya case pertains to the gang-rape and murder of a 23-year-old student in a moving bus on the night of December 16, 2012. The girl later succumbed to her injuries later in a Singapore hospital.

(The above story first appeared on LatestLY on Feb 17, 2020 04:21 PM IST. For more news and updates on politics, world, sports, entertainment and lifestyle, log on to our website latestly.com).