No-Dowry Affidavit: UP Govt Seeks Affidavit from Public Servants Declaring No Dowry was Taken By Them

Th Uttar Pradesh government has asked its personnel to provide an affidavit declaring that they did not take any dowry at the time of their marriage. The affidavit has to be submitted by October 18. 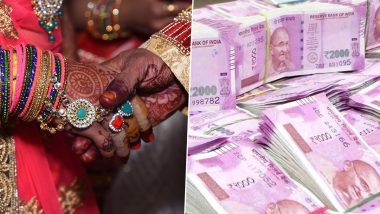 Lucknow, October 17: The Department of Women's Welfare, Uttar Pradesh has directed the public servants in the state, who got married after April 31, 2004, to provide an affidavit declaring that they did not receive dowry. The officials will have to submit the 'no-dowry affidavit' by October 18. It is being hailed as a much-required step to eradicate the social evil of dowry from the society. The circular, dated October 12, also asks authorities to take action against their personnel who fail to comply with the 'no-dowry affidavit' requirement. Uttar Pradesh Horror: Woman Brutally Assaulted by Husband in Bulandshahr, Dies.

Director of Women and Child Welfare Department, Manoj Rai reportedly said, “This is probably for the first time when our department has sought a no-dowry affidavit from government servants in a serious bid to get the provisions of the anti-dowry law enforced in the state,” reported HT. The circular regarding the affidavit have been served to all the head of departments, commissioners and other heads in the state and they have been asked to take action against employees who fail to do the needful. Uttar Pradesh Shocker: Man Hangs Wife over Dowry, Arrested.

Notably, under the Dowry Prohibition Act, 1961, all the public servants are required to provide a verified statement stating that they will not receive dowry when they get married, at the time of joining the work. Dowry is an illegal and punishable crime in India. The deep-rooted social evil, dowry has been the cause of several atrocities against women in the country.

(The above story first appeared on LatestLY on Oct 17, 2021 12:20 PM IST. For more news and updates on politics, world, sports, entertainment and lifestyle, log on to our website latestly.com).