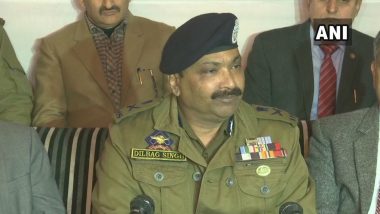 Poonch, June 30: Jammu and Kashmir Director General of Police (DGP), Dilbag Singh on Tuesday said that Pakistan is repeatedly trying to send terrorists from their launching pads, but many such attempts have been foiled earlier and will be thwarted in future too.

"Pakistan is repeatedly trying to send terrorists from their launching pads, but many such attempts have been foiled earlier and will be thwarted in future too. Today a review will be taken about the internal security arrangements here along with the situation at the border and our infiltration grid," said Singh.n"I am happy to receive the reports given by our officers from the field stating that our security grid is working strongly at the border as well as in the internal areas," he added. Jammu And Kashmir: Security Forces Kill 2 Terrorists in Anantnag's Bijbehara, Search Operation Underway.

Around 70 of them belong to Hizbul Mujahideen, around 20 belonged to Jaish-e-Mohammad while around 20 belong to Lashkar-e-Taiba," said Singh.n"South Kashmir which became a hub for terrorists...the number of terrorists have been declined there very quickly.

In fact, the youth who used to get provoked by them has also decreased. We helped such children and their families. Currently out of the new terrorists, only 24 are active even the infiltration grid is working very strongly," he added.

Earlier today, DGP Singh informed that two terrorists who killed a Central Reserve Police Force (CRPF) jawan and a five-year-old boy three days back at Bijbehara have been eliminated.nSingh said that terrorists were killed in an encounter at Anantnag's Waghama Bijbehara area in the Union Territory.