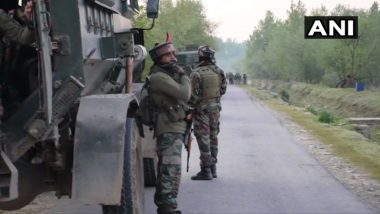 Informing about the latest development, the Jammu and Kashmir police chief said, as quoted by news agency ANI, "In an encounter at Waghama Bijbehara, two terrorists who killed a Central Reserve Police Force (CRPF) jawan and a 5-year-old boy three days back at Bijbehara, have been eliminated." Jammu & Kashmir: CRPF Jawan Succumbs to Injury in Attack by Militants in Bijbehara, One Child Also Killed.

Earlier on Friday, a jawan of the Central Reserve Police Force (CRPF) was severely injured in an insurgent attack that took place at a highway security convoy in Bijbehara, located in Anantnag. Following the attack, the jawan was rushed to the medical facilities, but succumbed to injuries. Along with the jawan, a child was also killed in the attack by militants in Bijbehara.

On Monday, three terrorists were killed in an encounter with security forces at Khulchohar area of Anantnag. The security forces said that identity and group affiliation were being ascertained.

(The above story first appeared on LatestLY on Jun 30, 2020 09:20 AM IST. For more news and updates on politics, world, sports, entertainment and lifestyle, log on to our website latestly.com).