The Jallianwala Bagh Massacre took place in Amritsar in Punjab on April 13, 1919- on the day of Vaisakhi or Baisakhi. Taking to micro-blogging site Twitter, the Prime Minister remembered their courage and sacrifice and stated that their valour will inspire Indians for the years to come. 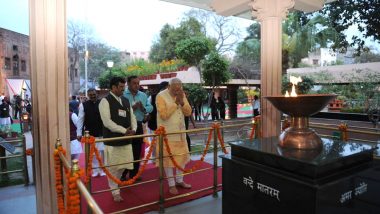 The Jallianwala Bagh Massacre took place in Amritsar in Punjab on April 13, 1919- on the day of Vaisakhi or Baisakhi. It is also known as the Amritsar massacre. The Massacre took place when Acting Brigadier-General Reginald Dyer ordered troops of the British Indian Army to fire their rifles into a crowd of unarmed Indian civilians in Jallianwala Bagh. As many as 400 people were killed while over 1,000 people were injured. Jallianwala Bagh Massacre, 101 Years Ago: How Many Were Martyred? Did General Dyer Face Consequences? Other FAQs.

I bow to those martyrs who were killed mercilessly in Jallianwala Bagh on this day. We will never forget their courage and sacrifice. Their valour will inspire Indians for the years to come. pic.twitter.com/JgDwAoWkAy

According to history, on April 13, 1919, Dyer, convinced a major insurrection could take place, banned all meetings. Scores of villagers gathered in the Bagh to celebrate the important Sikh festival of Baisakhi, and peacefully protest the arrest and deportation of two national leaders, Satyapal and Saifuddin Kitchlew.  Dyer and his troops entered the garden, blocking the main entrance behind them, took up position on a raised bank, and with no warning opened fire on the crowd for about ten minutes. The following day Dyer stated in a report that "I hear that between 200 and 300 of the crowd were killed. My party fired 1,650 rounds".

The Jallianwala Bagh is a historic garden and ‘memorial of national importance’ in Amritsar preserved in the memory of those wounded and killed in the Massacre. It houses a museum, gallery and a number of memorial structures.

(The above story first appeared on LatestLY on Apr 13, 2020 09:43 AM IST. For more news and updates on politics, world, sports, entertainment and lifestyle, log on to our website latestly.com).