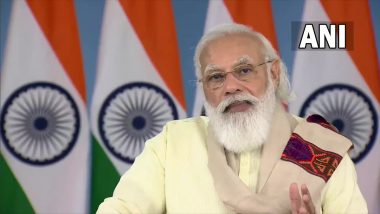 Uttar Pradesh Chief Minister Yogi Adityanath, who was in Siddharth Nagar on Saturday, said that this was in line with the commitment of the state government to provide the best possible health facilities to the people of the state and to do this, a chain of medical colleges is being across the state.

He said that the medical college of Siddharth Nagar has been constructed under the Pradhan Mantri Swasthya Suraksha Yojana. PM Narendra Modi to Visit Kedarnath on November 9.

Adityanath further stated that two years ago he had announced to set up a medical college in Siddharth Nagar district and now it is ready.

Along with this, seven medical colleges of the state have got recognition from the National Medical Council.

Admission process for 100-100 MBBS seats will be started through NEET in all these medical colleges from this session.

The Siddharth Nagar Medical College will be named after Madhav Prasad Tripathi, popularly known as Madhav Babu, a freedom fighter, politician and the first President of BJP Uttar Pradesh.

All arrangements for hospital, hostel, staff accommodation in this medical college are complete and the faculty is also complete.

This medical college will benefit not only the people of Siddharth Nagar but Balrampur, Maharajganj and neighbouring Nepal would get the best medical facilities here.

Gorakhpur AIIMS is to be inaugurated in next one-and-a-half month.

The Yogi government of Uttar Pradesh is number one in the execution of 44 schemes of the country and is now going to create a new record by inaugurating medical colleges.

Uttar Pradesh will be the first state in the country where seven-state autonomous medical colleges are going to be inaugurated simultaneously.

With the operation of these medical colleges, 700 MBBS seats in Uttar Pradesh will increase from this session. All these seven medical colleges have got permission from the National Medical Council for admission to 100 seats each in MBBS. There will be no shortage of doctors in the state in the coming years.

(The above story first appeared on LatestLY on Oct 17, 2021 08:54 AM IST. For more news and updates on politics, world, sports, entertainment and lifestyle, log on to our website latestly.com).