A Delhi court on Wednesday acquitted journalist Priya Ramani in the criminal defamation case filed by MJ Akbar, who is a former Union Minister and veteran journalist. 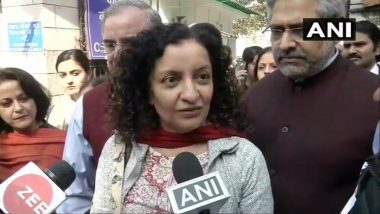 New Delhi, February 17: A Delhi court on Wednesday acquitted journalist Priya Ramani in the criminal defamation case filed against her by MJ Akbar, who is a former Union Minister and veteran journalist. "A woman has right to put grievance before any platform even after decades," Additional Chief Metropolitan Magistrate Ravindra Kumar Pandey said while acquitting Priya Ramani. #MeToo: MJ Akbar Did Not Have a Sterling Reputation, Journalist Priya Ramani Tells Delhi Court.

On February 1, the court kept the judgement reserved after both of the parties concluded the final arguments in the matter. Senior Advocate Rebecca John, who represented Ramani in the case, urged the court to acquit her client. Akbar's lawyer and Senior Advocate Geeta Luthra stressed that Akbar's reputation was damaged due to allegation levelled by Ramani. #MeToo: MJ Akbar, Journalist Priya Ramani Refuse Settlement in Defamation Complaint Case.

In 2017, Ramani wrote an article for the Vogue magazine where she described her ordeal of being sexually harassed by a former boss during a job interview. One year later, when #MeToo movement was at its peak, she revealed that the person alluded to as harasser in the Vogue article was Akbar.

Pursuant to this, Akbar filed the criminal defamation case against her and resigned as the Union Minister. Trial began in 2019 and went on for almost two years. During the trial, Akbar termed Ramani's allegations fictitious. Ramani's acquittal is significance as it will also set a precedent for similar cases which arose from the discourse-changing #MeToo movement.

(The above story first appeared on LatestLY on Feb 17, 2021 03:20 PM IST. For more news and updates on politics, world, sports, entertainment and lifestyle, log on to our website latestly.com).