Senior Congress leaders, some of them from the G-23, are miffed with the way the leadership scripted the exit of Amarinder Singh from Punjab. 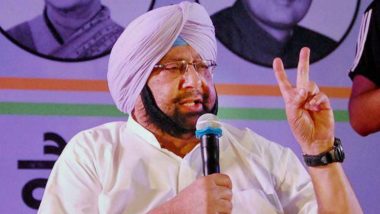 New Delhi, September 19: Senior Congress leaders, some of them from the G-23, are miffed with the way the leadership scripted the exit of Amarinder Singh from Punjab. Sources in the G-23 said that the Congress "sent three hangman -- a former Chief Minister, who lost on two seats, a Delhi leader, who has been scoring zero in the consecutive elections and a person, who does not match the stature of the chief minister (Amarinder Singh, who got 80 seats in the Assembly of 117)".

The majority of the disgruntled leaders have reached out to the outgoing chief minister and expressed solidarity with him but at the same time have restrained themselves from speaking out publicly. Who Will Be Next Punjab CM? List of Congress Leaders Who May Succeed Captain Amarinder Singh.

Amarinder Singh has not bowed down and has remained defiant since the Congress called the Congress Legislature Party (CLP) meeting on Friday midnight without informing the Chief Minister, who was the CLP leader before resigning on Saturday.

Sources said the Congress did not anticipate the defiance of Amarinder Singh and thought that he will attend the CLP and will follow the AICC script, but he resigned ahead of the CLP and did not attend the meeting.

And he pointed guns, dubbing Navjot Sidhu as anti-national, dangerous, unstable, incompetent and a security threat to the state and the country, Amarinder Singh also said that he will fight any move to make the Punjab Congress president the chief minister "tooth and nail."

Making it clear that he had no intention of quitting politics, Amarinder Singh said there was no question of supporting Sidhu, who was clearly mixed up with Pakistan and a danger as well as a disaster for Punjab and the country.

"I cannot allow such a man to destroy us, I will continue to fight the issues that are bad for his state and its people," said the outgoing Chief Minister, lashing out at Sidhu for his close alliance with the leadership across the border.

(The above story first appeared on LatestLY on Sep 19, 2021 01:02 PM IST. For more news and updates on politics, world, sports, entertainment and lifestyle, log on to our website latestly.com).