Who Will Be Next Punjab CM? List of Congress Leaders Who May Succeed Captain Amarinder Singh 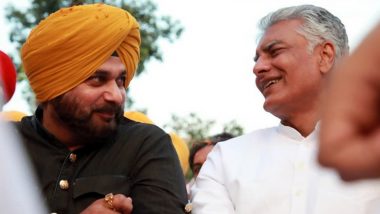 Incumbent President of Punjab Pradesh Congress Committee, Navjot Singh Sidhu could be the first choice of the grand old party for the next Punjab CM. A former international cricketer, 58-year-old Sidhu is the youngest of the chief ministerial faces under discussion. He has been at loggerheads with Captain Amarinder. He said to have support from Rahul Gandhi and his sister Priyanka Gandhi Vadra.

A three-time MLA from Abohar constituency (2002-2017), Sunil Jakhar is among those in the race for the chief ministerial post. He was seen as an effective Opposition Leader when he held the post during the previous SAD-BJP government. If he is picked, he will be the first Hindu chief minister after the reorganisation of Punjab in 1966.

Sukhjinder Singh Randhawa is a three-time Congress MLA and has been elected in 2002, 2007 and 2017. He held the Jails and Cooperation portfolio in the outgoing cabinet of Captain Amarinder Singh. He is seen as a fierce critic of the Badal family and Bikram Singh Majithia and has been an influential figure in the Majha region.

Partap Singh Bajwa is currently Congress Rajya Sabha MP from Punjab. He is a former president of the PPCC and a three-time MLA. He has also been the Lok Sabha MP from Gurdaspur.

(The above story first appeared on LatestLY on Sep 19, 2021 08:47 AM IST. For more news and updates on politics, world, sports, entertainment and lifestyle, log on to our website latestly.com).