The protesting farmers are worried the new laws will eliminate the safety cushion of a Minimum Support Price (MSP) and procurement system, while rendering ineffective the mandi system that ensures earnings for various stakeholders in the farm sector. The government has been in talks with farmer leaders to resolve the issue. 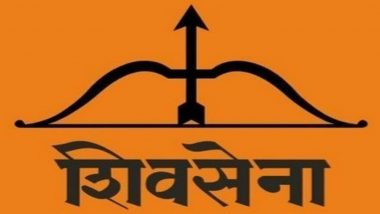 Mumbai, December 4: The Shiv Sena on Friday said that the farmers from Punjab have brought the Modi government to its knees through their protest against the new farm laws and the world has taken note of the unity shown by them. The party also urged the Centre to hear out the demands of the protesting farmers.

"Despite the winter chill, the farmers from Punjab have made the Modi government sweat. The protesters seem to be getting aggressive. The Modi government had not faced this kind of a challenge earlier. The government's usual weapons of CBI, Income Tax, ED and NCB are of no use in this case. The farmers have brought the government to its knees," the Sena said in an editorial in party mouthpiece 'Saamana'.

"They are firm on their demand that the three controversial farm laws must be repealed. They even declined food and water provided by the government during a round of talks," it said. Farmers Protest: 4th Round of Talks Conclude, Govt Assures 'MSP Will Continue', Next Meeting on December 5.

The Uddhav Thackeray-led party hit out at the Modi government saying that it carried out "unjust" demonetisation, rolled out "devastating" GST. It also alleged that in order to hide the issues of unemployment and inflation, the government made use of issues like India-Pakistan conflict.

"It offered Ram temple to the people troubled by the lockdown. However, no lollipop worked before the farmers from Punjab. This is the success of Punjab's unity. All attempts were made by the BJP's IT cell to discredit the protest," the party said.

BJP IT cell chief Amit Malviya called Rahul Gandhi the most discredited opposition leader in the country when the former Congress president posted a picture of an old farmer being beaten by the police, the Sena said.

"But Twitter made Malviya aware of the reality," it said.

"We are not happy that the Modi government has been cornered by the protesters. But we only want the government to hear the farmers out. Today Punjab is on the boil, but what will happen if the entire country reacts in a similar way?" it asked. Farmer Leaders, In Meeting With Govt, Call For Special Parliament Session to Abolish New Farm Laws.

Thousands of farmers have gathered at Delhi's gateways to demand a repeal of the Centre's three new farm laws. The protesting farmers are worried the new laws will eliminate the safety cushion of a Minimum Support Price (MSP) and procurement system, while rendering ineffective the mandi system that ensures earnings for various stakeholders in the farm sector. The government has been in talks with farmer leaders to resolve the issue.