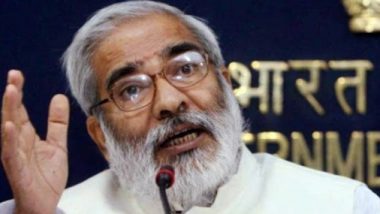 New Delhi, September 13: Raghuvansh Prasad Singh, Former Union Minister, died on Sunday. Singh was admitted at All India Institute of Medical Sciences (AIIMS) in Delhi a few days ago following ill health. Singh represented the Vaishali constituency in Bihar and was the Union Minister for Rural Development in the Congress-led UPA-I government. Reports informed that Singh was admitted to the hospital a week ago after developing post-COVID-19 complications. He had resigned from the primary membership of Rashtriya Janata Dal (RJD) last week. Singh's condition deteriorated considerably on Saturday following which he was put on a ventilator.

Raghuvansh Prasad Singh is no more among us. His demise has left a void in the political sphere of Bihar as well as the country: PM Narendra Modi pic.twitter.com/Cs9D7IhZbo

Singh was a long-time associate of former Bihar Chief Minister Lalu Prasad Yadav. Taking to Twitter, Lalu Prasad wrote an emotional post saying that he will miss his dear friend. Singh was born on June 6, 1946. He represented the Vaishali constituency of Bihar and was the national vice president of the Rashtriya Janata Dal political party. Lalu Prasad Yadav Attempts to Persuade Raghuvansh Prasad Singh to Stay Back in RJD, Says 'You Are Not Going Anywhere'.

He was admitted at All India Institute of Medical Sciences (AIIMS) in Delhi. pic.twitter.com/PbqAEBtkfF

The 74-year-old leader was widely regarded as an expert in rural and agricultural area of the country. He was popularly known as the architect of the MNREGA scheme and credited with the implementation of the NREGA (National Rural Guarantee Employment) Act.

(The above story first appeared on LatestLY on Sep 13, 2020 12:34 PM IST. For more news and updates on politics, world, sports, entertainment and lifestyle, log on to our website latestly.com).