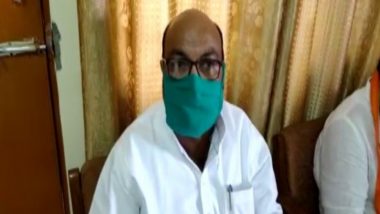 Police sources said Lallu and others were arrested after they reached the Raj Bhavan and squatted on the road. They have been taken to Eco Garden, they said. The Congress is holding a nationwide demonstration on Monday before Raj Bhavans to protest the ongoing stalemate on convening of an Assembly session in Rajasthan.

Besides Lallu and Punia, around 150 other party workers have been arrested while staging the dharna here against the alleged attempts to “murder” democracy in Rajasthan by the BJP, Lalan Kumar said. Rajasthan Political Crisis: Governor Kalraj Mishra Orders Ashok Gehlot Govt to Call For Assembly Session.

UP Pradesh Congress Committee Chief Lallu alleged the ruling BJP is busy in toppling elected governments at a time the country is facing a pandemic.

He alleged the Raj Bhavan was “misused” in Goa where the Congress was not allowed to form a government despite winning the highest number of seats, and the party's elected governments were “toppled” in Karnataka and Madhya Pradesh too. There is similar attempts to destabilise governments in Punjab and Maharashtra, he alleged.

“The same is being done in Rajasthan. All this has raised a question mark on the role of Raj Bhavan,” he told PTI over phone. Lallu also tweeted about his arrest. “My 21st arrest in less than six months. Protest-demonstration is a right granted by the Constitution. Why is this government scared? Listen, BJP government, ‘we will not tolerate murder of democracy',” he posted

Punia charged that the BJP was working like “political looters” who do not care who the people have elected.

“They think even if people have not elected them, they can trample upon the mandate by buying MLAs to form governments. After toppling the elected governments in Madhya Pradesh and Karnataka, they are now targeting the Rajasthan government,” he said.

The Rajasthan Cabinet has passed a resolution for convening a session of the state assembly, but Governor Kalraj Mishra rejected it on the “directives of the BJP”, he claimed. The reason for this is also to save the membership of rebel Congress leader Sachin Pilot who destabilized the Rajasthan government, Punia added.