A rare two-headed cobra was rescued from Kalsi forest division of Dehradun district in Uttarakhand on Thursday. 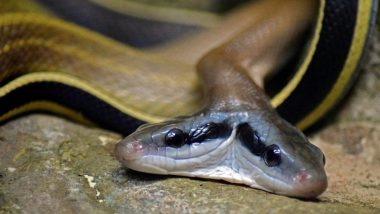 Dehradun, August 13: A rare two-headed cobra was rescued from Kalsi forest division of Dehradun district in Uttarakhand on Thursday. According to snake catcher Adil Mirza, who works with the forest department, they had received information about a small cobra in an industrial unit premises in Vikas Nagar area. Later, it turned out that it was around one-and-a-half feet long two-headed cobra. Rare Albino Spectacled Cobra Found in Uttarakhand; From White Sea Turtles to Seal Pup, Pics of Albino Animals Spotted This Year Will Leave You Amazed.

"DFO Kalsi instructed me to go and rescue the cobra. When I went there, I was surprised as it was a two-headed spectacled cobra. In my 15 years as a snake catcher, I have never come across such a specimen. It is a very rare snake," Mirza, who has been rescuing snakes for the last 15 years, was quoted by Hindustan Times as saying. He added the rescued snake seemed less than two weeks old. Uttarakhand: King Cobra Spotted at Over 2,100 Metres Altitude in Nainital's Mukteshwar For First Time (Watch Video).

The forest department sent the two-headed cobra to to a rescue centre at the Dehradun zoo, where veterinary doctors will examine it. "After doctors check it, it will be decided whether to release the snake or keep it for a study. Such snakes rarely survive in wild," said District Forest Officer (Kalsi) BB Martolia. The two-headed cobra is a very rare specimen.

Snake sighting is common during the monsoon season in Uttarakhand. Earlier this year, a team of researchers from Wildlife Institute of India (WII) and Forest Research Institute (FRI), Dehradun, had confirmed the existence of a rare black-bellied coral snake, the smallest of the cobra family, in the state. The rare cobra was spotted in the forests of Nainital and Mussoorie.

(The above story first appeared on LatestLY on Aug 13, 2021 04:52 PM IST. For more news and updates on politics, world, sports, entertainment and lifestyle, log on to our website latestly.com).