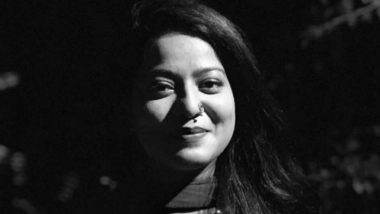 New Delhi, June 22: Delhi Police on Monday opposed the bail plea of Jamia Coordination Committee member Safoora Zargar in Delhi High Court stating that 39 deliveries have taken place in Delhi's Tihar Jail in the last 10 years. The police also maintained that Zargar's pregnancy is no ground to give bail.

The Delhi Police, while submitting the status report in the Delhi High Court on Monday maintained that Zargar's pregnancy does not dilute the gravity of her alleged crime. It also informed the bench that adequate medical care has been provided to her in jail. Safoora Zargar, Pregnant JMI Student, Denied Bail Again in Northeast Delhi Riots Case.

In its status report, Delhi Police said, as quoted by News 18, "There is no exception carved out for pregnant inmate, who is accused of such heinous crime, to be released on bail merely because of pregnancy. To the contrary, the law provides for adequate safeguards and medical attention during their custody in jail." Adding more, the Delhi Police said, "It is respectfully submitted that till date 39 deliveries have taken place in Delhi prison in last 10 years."

Earlier on Wednesday, Zargar moved the Delhi High Court seeking bail in a case related to communal violence in northeast Delhi during protests against the Citizenship Amendment Act in February. She was denied bail on June 4 by Delhi court in the Unlawful Activities (Prevention) Act (UAPA) case pertaining to the communal riots in northeast Delhi, which left at least 53 people dead and 200 injured.

(The above story first appeared on LatestLY on Jun 22, 2020 01:29 PM IST. For more news and updates on politics, world, sports, entertainment and lifestyle, log on to our website latestly.com).