Security was beefed up in and around the residence of General Rawat, with only a select few allowed entry into the house. 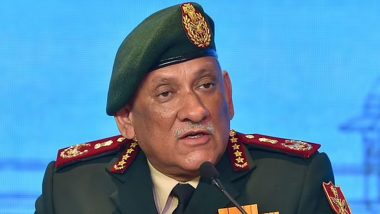 In a tragic incident earlier on Wednesday, General Rawat (63), his wife Madhulika Rawat, and 11 others were killed after the IAF chopper they were travelling in crashed near Coonoor in Tamil Nadu. CDS General Bipin Rawat, His Wife Madhulika Rawat, 11 Others Die in IAF Helicopter Crash: Amit Shah, Rajnath Singh, Rahul Gandhi & Others Offer Condolences (Read Tweets)

General Rawat and his wife Madhulika Rawat are survived by their two daughters -- Kritika and Tarini.

Security was beefed up in and around the residence of General Rawat, with only a select few allowed entry into the house.

Rawat's family has been serving the Indian Army for four generations. His father Laxman Singh Rawat had served the Indian Army, and rose to the rank of Lieutenant-General.

His wife, Madhulika, was the President of the Army Wives' Welfare Association (AWWA). The AWWA is one of the largest NGOs working towards ensuring the welfare of wives, children, and dependents of Army personnel. CDS General Bipin Rawat, 12 Others Die in Helicopter Crash in Tamil Nadu, Confirms IAF

(The above story first appeared on LatestLY on Dec 09, 2021 08:46 AM IST. For more news and updates on politics, world, sports, entertainment and lifestyle, log on to our website latestly.com).